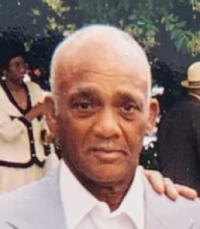 Mr. J.T. Cauthen, 91, of entered into eternal rest on Monday, January 17, 2022, at his residence, 370 Medlin Street, Statesville, N.C. He was born on November 23, 1930, in Lincoln County, N.C., to the late John Cauthen and Mamie Johnson Cauthen. In addition to his late parents, he was preceded in death by his siblings, John Cauthen; Margaret Cauthen Hepvurn, Graham Cauthen, Frank Cauthen, Russell Cauthen, and Pal Cauthen.

He attended and graduated from The State School for the Blind and the Deaf in Raleigh, N.C. J.T. once worked at Cannon Mills in Kannapolis, N.C., as a Doffer in the Weaving Department. He retired after thirty years. He also worked at Charlie Smith Company of Newport News, Va., and Gilbert Myers Company of Cleveland, N.C. He later started collecting scrap metal in his spare time and as a hobby. He loved drinking coffee. He attended the Church of Christ, in Newton, N.C.

He leaves to cherish the memory of his life three brothers, Terry (Dorothy) Cauthen, Cal Gene Cauthen, and Harold (Lorene) Cauthen, all of Salisbury; three sisters, Mayola Thomas and Edna Carr, both of Baltimore, Md., and Macy Cauthen of Concord; a sister-in-law, Jackie Cauthen; a favorite nephew, Tyrone Cauthen; his caregiver, Jeanette Cauthen; a special friend, Ramona Heller; and a host of nephews, nieces, cousins, other relatives and friends.

A Celebration of Life will be held at Living Church Ministries, at 12 noon on Tuesday, January 25, with Apostle Dr. Ronnie Parson, officiating, and Elder Otha Thorton, eulogizing. The members of the family will receive friends from 11 a.m. until 12 noon. Burial will follow in the Belmont Cemetery.

Visit the Book of Memories for Mr. Cauthen at www.rutledgeandbigham.com.

Rutledge and Bigham Funeral Home is serving the Cauthen Family.