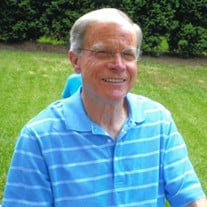 He was born on May 8, 1941, in Landis, N.C., to the late Carl and Evelyn Cook Beaver. Mr. Beaver was a graduate of Landis High School. He worked in accounting at Burlington Industries with his wife Joyce and later retired from Hoechst Celanese. After his retirement, he worked at the ABC Store in Mooresville.

Mr. Beaver was a very competitive tennis player until he began his battle with Lymphoma in 2011. He was a Roger Federer, Blue Devils, Red Sox, and Dallas Cowboys fan.

A Celebration of Life will be held at 6 p.m. on Monday, December 19, at Cavin-Cook Funeral Home Chapel with Ricky Beaver officiating. The family will receive friends immediately following the service.

The family would like to give a special thanks to his caregivers, Cindi, Jennifer, and the caring staff at Hospice of Iredell County.

Cavin-Cook Funeral Home & Crematory, Mooresville, is serving the Beaver family. Condolences may be made to the family at www.cavin-cook.com.