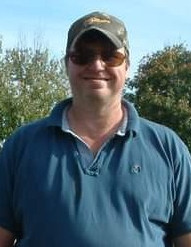 Michael was born October 23, 1964, in Statesville to Wayne Irvin Henderson and Carolyn Dianne Johnson. He graduated from South Iredell High School and married his wife, Pamela Byers Henderson, on August 30, 1986. They were married for 36 years and raised three children. He was a member of Beulah Baptist Church and loved to sing on the Praise Team. He was excited about the chance to serve on the Security Team and First Impressions Team.

Michael was a truck driver by profession. He loved what he did, and he was good at it. He lived his life in such a way that no one was a stranger. He loved the Lord and his family.

A service to celebrate the life of Michael Henderson will be conducted at 4 p.m. on Thursday, June 16, 2022, at Beulah Baptist Church, the Reverend Brian Burgess officiating. The family will visit with friends from 3 to 4 p.m. prior to the service at the church.

In lieu of flowers, memorials made be made to the Upper Room, 129 West Front Street, Statesville, NC 28677. Prior to the service the family will be assembled at the home of Cyndi Turgeon, 120 Old Warren Drive, Statesville, N.C.