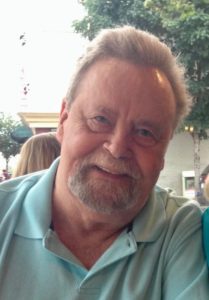 Mr. Faust was born on February 10, 1945, in Norfolk, Va., and was the son of the late Kyle Howard Faust and Lucille Gilreath Faust.

He was educated in the Statesville Schools and was a veteran of the U.S. Navy, serving in Viet Nam. Following his military service, he went to work for General Electric in Hickory as a welding engineer for over 30 years. Richard was an entrepreneur in that he had the ability to make trading deals with others. He always had a knack for having a vision for opportunities. He never wanted the glory for finding them. He was a selfless person whose humility was one of his characteristics. His family was very important to him, and he was a father figure for others as well.

Visitation for Mr. Faust will be on Friday from 1 until 2 p.m. at Bunch-Johnson Funeral Home with funeral to follow at 2 p.m. in the chapel. Interment with full military honors will be held at 3 p.m. at Iredell Memorial Gardens.

Memorials may be made to St. Jude’s Children’s Hospital.

Words of comfort and shared memories may be left with the family at www.bunchjohnson.com.