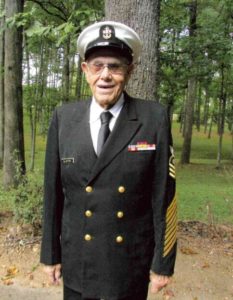 Vic was born September 20, 1925, in Iredell County, N.C., and was the son of the late Arthur and Alda Cloer McIntyre. He was a graduate of Cool Spring High School and served honorably in the U.S. Navy during WWII and the Korean War. He also served in the Navy Reserves, and he retired in 1985 after 42 years of service to his country at the rank of chief petty officer. From 2000-2017, he joined the American Red Cross. Then he made over 60 overseas trips with the Western United Methodist Conference to help people in need. In 1950, he married the late Louise Murdock McIntyre. He owned McIntyre Custom Floors and also served with the Cool Spring Volunteer Fire Department.