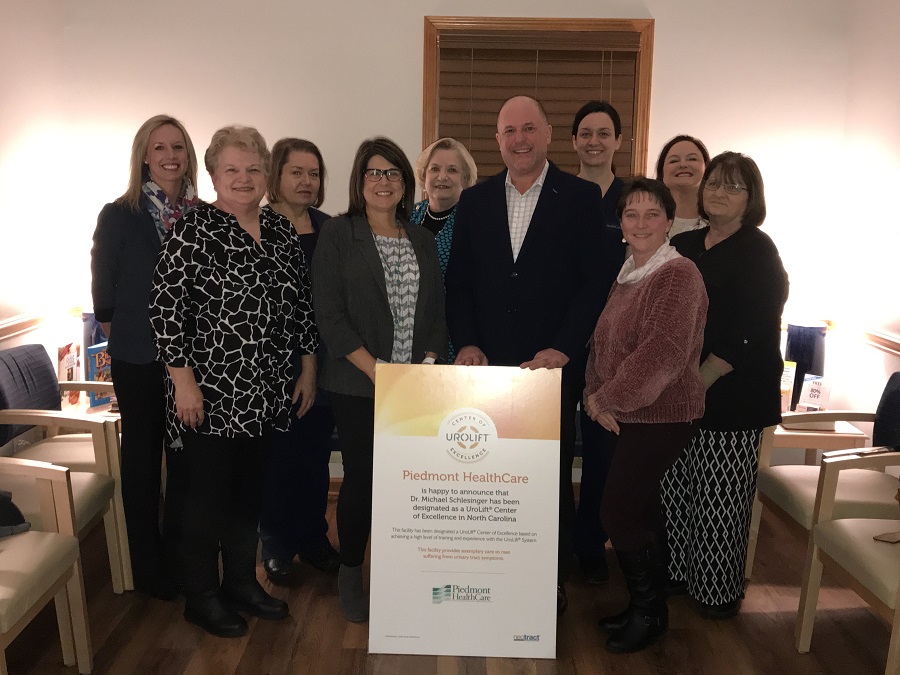 On Monday the Piedmont HealthCare urologist’s practice celebrated its designation as a UroLift Center of Excellence for Schlesinger’s mastery of a minimally invasive surgical procedure used to implant the Urolift System. Only five other urologists in North Carolina have earned that designation.

The procedure provides rapid relief and recovery from Benign Prostatic Hyperplasia (BPH), a common condition in which the prostate enlarges as men age, causing discomfort and problems urinating.

“Fifty percent of men at age 50 will have some type of prostate problem,” Schlesinger said. “Now, they have another choice” besides medication or more invasive surgical procedures that can cause sexual dysfunction.

In 2019, the UroLift procedure was performed 60,000 times in the United States, according to Darin Bergstein, who represents Neotract.

Schlesinger began performing the procedure seven months ago after receiving significant training. The benefits for his patients, he said, are obvious.

“The patient has a quick recovery, and it’s the only option that preserves sexual function,” he explained.

Schlesinger typically performs the procedure in an operating room, but he plans to begin offering it in his office since it only takes 10 minutes.

“The patient is back to work in two to three days,” he explained.

Joe Cloaninger, 91, had the UroLift procedure on December 10 after experiencing problems associated with an enlarged prostate for more than a decade. He first learned about the procedure in Our State magazine.

His urologist didn’t perform the procedure so he thought he had to go out of town for treatment.

“I was threatening to go to Chapel Hill and have it done,” Cloaninger said. “Then I heard about Dr. Schlesinger.”

Less than a month after the procedure Cloanginger is medication-free and says he feels “good.”

“As a community-based organization, there’s always a goal of keeping patients local,” he said. “Having a large number of patients to have the procedure here in town is good because they’re closer to home and treated in a facility where they feel comfortable.”

Click HERE for more information about the UroLift System.