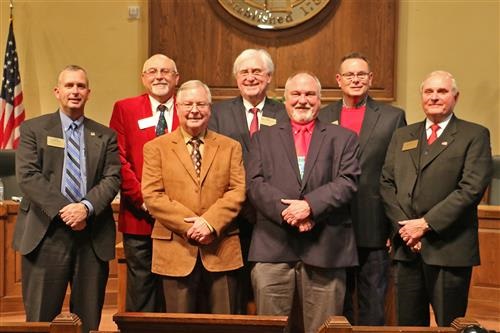 Board plans to announce new hire in May

The Iredell-Statesville Schools Board of Education plans to select a new superintendent by May of 2020, according to a timeline approved by the board at Tuesday’s special meeting.

Brady Johnson, who has been the superintendent now for 10 years, announced last month that he will no longer be superintendent when his contract expires on June 30, 2020.

The board is planning for the new superintendent to begin work on July 1.

A week after a former county commissioner and parent of an I-SS student publicly criticized the board for not hiring a professional services firm to assist in the search, board members defended their decision to handle the search themselves.

“I think it’s important for the public to know we are following a process and we aren’t just shooting from the hip,” board member said Sam Kennington said. The board will following the recommendations of the N.C. School Boards Association throughout the process, he explained.

Kennington was selected by the board to chair the superintendent’s search committee.

Board chairman Martin Page said Kennington’s experience as a public-school administrator and former county commissioner, along with his attention to detail, made him an ideal choice to oversee the search process.

The board will advertise the superintendent position on Dec. 10. That will allow applicants who may be working in public education a chance to prepare their application during the winter break.

Candidates are being asked to submit an application via mail by Jan. 31, 2020.

The board will advertise and conduct at least one public hearing as part of the search.

All board members will get the same copies of candidate applications and will review the information independently over a two-week period. The board will then meet to discuss the applicants and narrow the field to five finalists.

“One of the reasons we chose to do it in-house is it would behoove the seven of us to review each and every application,” Kennington said.

The finalists would be interviewed in March and April.

During that time, school board member Todd Carver will conduct background checks and check references for the finalists. Carver was selected for this role by the board because of his experience working at the Iredell Sheriff’s Office. He’s also familiar with how to effectively interview/question people through his role as investigator.

A final decision and announcement would be made sometime in May, according to the board’s timeline.

Kennington said the names of the candidates and contract negotiations will be conducted in closed session pursuant to the rules governing the superintendent’s search. However, the board must approve the contract in an open session.

The board will work with I-SS communication specialist Jada Jonas to try to curb rumors circulating in the community about the search process.

One solution the board reviewed is “to be as transparent as possible and posting updates on the I-SS website as frequently as possible,” Jonas said.

Jonas discussed devoting a section on the I-SS website to everything that happens at the board meetings. She would be responsible for posting an update with the date and a description of what has been done.

Kennington said he wants to dispel one rumor which is the board isn’t going to conduct adequate surveys.

The board, he said plans to conduct separate surveys of the staff and community members to learn what qualifications they are looking for in the next superintendent. Surveys would be conducted in December and January.

Principals and assistant principals have already been given an opportunity to provide recommendations, Kennington said.

During the meeting, the board used Policy #7420 and #7421 as reference for developing criteria and a guideline for the next superintendent. It covered topics such as the candidate must reside in Iredell County once selected and be in good health as determined by a health care provider.

The board reviewed the application and Frequently Asked Questions for posting to the website to help the public better understand this process.

The board was also given copies of questions and other reading materials that another North Carolina school board used to aid its superintendent search.

School board attorney Costi Kutteh was also on hand at Tuesday’s meeting to provide guidance and clarification for any legal issues related to the search process.

Near the end of the meeting the board discussed the possibility of providing a stipend for Jonas, who will help oversee community engagement efforts and other duties associated with the search in addition to her regular responsibilities with the school system.