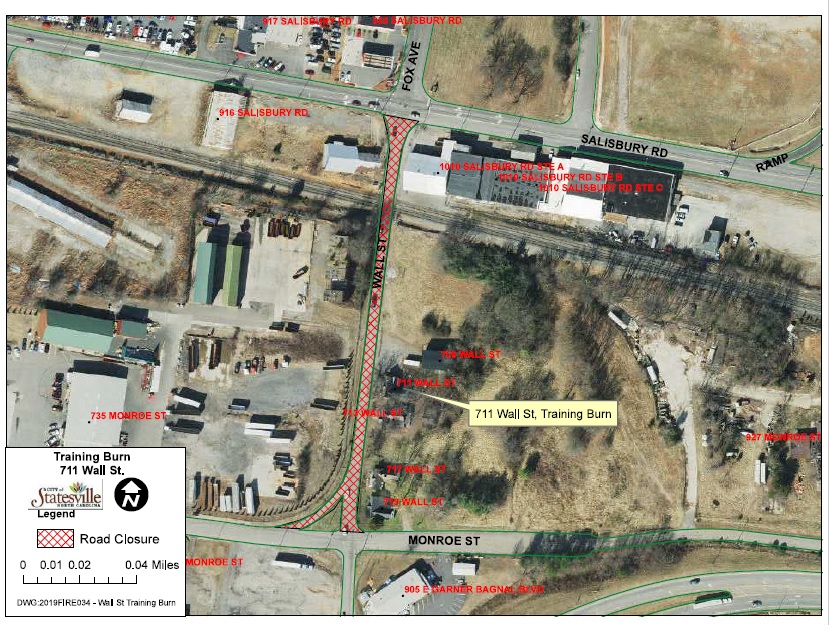 Public can expect heavy smoke in the area, as well as traffic congestion

Statesville Fire Department personnel will hold a training exercise on Friday, November 15, on Wall Street between Salisbury Road and Monroe Street. The exercise, which involves the controlled burning of a structure at 711 Wall Street, will begin at 8:30 a.m. and end by 2 p.m.

During this exercise, the public can expect heavy smoke in the area, as well as some traffic congestion. Streets may be partially blocked; alternate routes will be marked around the training site for most of the day. It is anticipated that the training will also result in elevated noise levels and bright lights from the fire equipment on the scene.

“This temporary inconvenience is necessary to obtain this level of training,” explained Statesville Fire Chief Spencer Lee. “This training is invaluable to the continued mission of our department to be ready to fight fires and save lives. It’s also a contributing factor in our national accreditation as a fire service and the ISO rating, which effects fire insurance rates.”

The property owners requested that the structure be burned. The timing coincided with the need to certify the new fire recruits enrolled in Mitchell Community College’s firefighter training classes, explained Captain Kyle Bell, who is overseeing Friday’s exercise.

The fire department will watch over the fire until it is completely out. The property owners are responsible for removing the debris and re-scaping the grounds.

Because of the amount of water that will be used from nearby hydrants, some residents in the area may experience discolored water. To clear the water, run cold water in the bath tub for no longer than five minutes. If the water doesn’t clear up, call 704-878-3417 Monday through Friday between 7 a.m. to 3:30 p.m. If after hours, call the non-emergency police number at 704-878-3406.