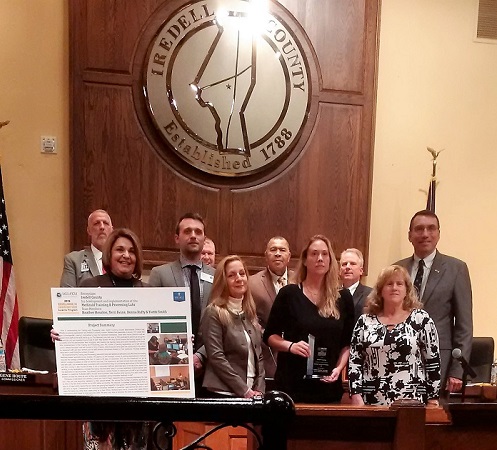 PHOTO: Iredell County commissioners recognized the Department of Social Services staff during the Nov. 19 board meeting for receiving the Excellence in Innovation Award from the N.C. Association of County Commissioners for 2019.

The Iredell County Department of Social Services was recently presented an Excellence in Innovation Award from the N.C. Association of County Commissioners for 2019.

Matt Bigelow, NCACC project development manager, recognized the Iredell DSS staff for being one of 10 in the state to win the award, which recognizes best practices across the state in dealing with a variety of county issues.

Iredell County DSS received was selected for the award for the staff’s handling of Medicaid applications.

Medicaid applications are on the rise throughout the state, Bigelow said, and Iredell DSS has created training labs and programs to help staff manage that caseload. The result has been faster processing of benefits. The innovations have also helped new hires get up to speed, he added.

County Commissioner Chairman James Mallory praised director Yvette Smith for setting the tone for her team and thanked the staff members for their hard work.

“I don’t know anyone who works harder to meet the requirements — more importantly, not just the metrics, but the needs of our citizens,” Mallory said.

Maintaining compliance with the law is a huge part of what they do, Commissioner Ken Robertson said.

Iredell DSS operates consistently and with integrity, which shows that “we have a well-run county and it’s well-led at the department level,” he said.

Commissioner Gene Houpe commented that the DSS representatives did an excellent job presenting the information to the other counties in the state at the NCACC conference.