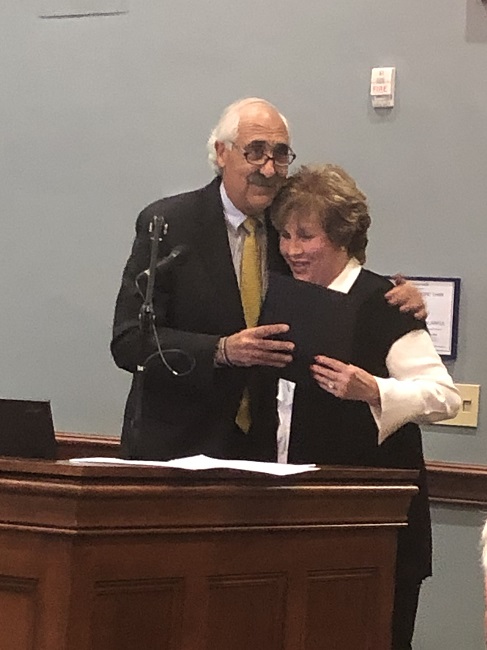 Statesville Mayor Costi Kutteh honored Gloria Hager during this week’s City Council meeting for her efforts as a business owner and community leader during the past 50 years.

“We have all benefited from Gloria’s numerous business endeavors here in the City of Statesville, bringing us books and art and many wonderful things,” Kutteh said Monday night. “We have issued this proclamation thanking her for her commitment to this city and hoping for many, many more years.”

In addition to the city proclamation, Hager also received an honor from North Carolina Gov. Roy Cooper recognizing her dedication to the City of Statesville. Hager is the long-time owner of gg’s art frames and gifts, located at 101 West Broad Street.

In other business, the Council voted to approve financing options and award contracts for construction for the scaled-down Municipal Services Building, which will now house only the Statesville Police Department. The council recently scrapped plans to include a fire station and space for Iredell County EMS in the facility.

Councilman Steve Johnson again voiced his concern about the city adding $11 million to its debt load or this particular project.

“Again we are putting the city into a position with this debt that we will need to raise taxes for the third year in a row,” Johnson warned. “We are economically stagnant, and we are doing nothing but collecting debt that we are passing on to the taxpayers of the cIty.”

The council voted to approve the financing options presented from BB & T Bank and awarded construction contracts to G.L. Wilson for the building and SimCon for the modification of the roadway at the 1809 Shelton Avenue location.