County officials, including commissioners James Mallory, Gene Houpe and Ken Robertson, were also in attendance, along with Mooresville Mayor Miles Atkinson and Town Board members Lisa Qualls and Thurman Houston.

MGSD Superintendent Steve Mauney and board chairman Roger Hyatt welcomed guests, with Hyatt noting that “it’s always a good day to be in Mooresville,” especially “to sit around a table to talk about common concerns.”

Staff members presented the system’s five legislative priorities. Chief Financial Officer Terry Haas asked legislators to increase funding to the 2008 level, plus inflation for the succeeding years. Tired of being the “Queen of No,” Haas asked that the state “do the right thing by the children of the State of North Carolina.” 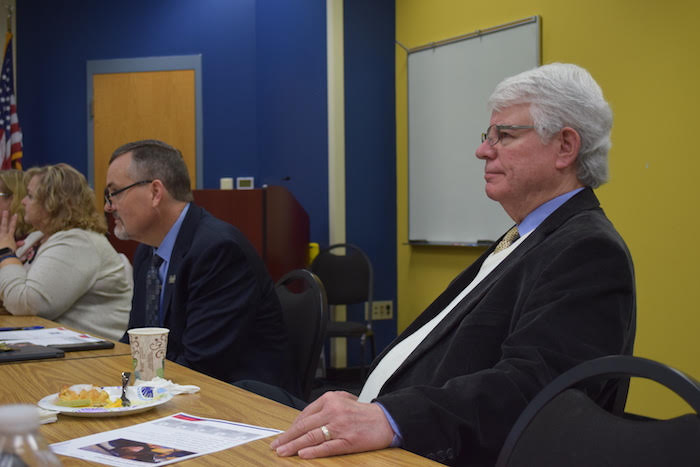 Assistant Superintendent Ingrid Medlock requested that school personnel’s salaries at all levels be increased. Medlock noted that a teacher shortage is emerging because university students no longer see education as a viable career with a starting salary of $35,000.

Medlock said teachers cannot truly live comfortably on this salary without a second job or a spouse who makes a significant salary.

Questioning why teachers who earn a master’s degree to improve their classroom instruction are no longer compensated for their increased education, Medlock noted that National Board Certified Teachers get a 12 percent increase. She also requested legislators reinstate longevity pay for teachers for each decade they stick with the career.

Medlock also asked for raises for classified personnel who perform important system jobs at a salary that Medlock said embarrasses her to offer. She also lamented the difficulty of attracting new hires when Virginia, South Carolina, and Texas recruiters simply put a sign with a significantly higher starting pay on their tables at recruiting events.

Marsh said she hoped that the state lawmakers and the governor, with a $900 million surplus, would find money to cover unfunded mandates and these important needs.

Mauney pointed out that only certain teachers were eligible for the bonuses offered for exceptional classroom testing performance, an important limitation that caused friction among staff. He beliefs the merit bonuses should be available to all staff.

“Everyone plays a crucial role in the success of our students,” said Medlock. “We need to make sure that everyone can get a piece of the pie.”

Mike Royal, MGSD chief operations officer, spoke in favor of granting all local school systems the calendar flexibility that the General Assembly allows to the state’s 185 charter schools and some school districts. He pointed out that local school systems best know how to serve the needs of their communities and to align with their local community colleges.

Royal also urged Sawyer and Fraley to block any legislation that would define year-round schools or punish districts that choose to implement a calendar that best serves their particular community.

Communications Officer Tanae Sump-McLean next spoke in favor of holding charter schools to the same rules, accountability, and standards as public schools. She also asked for legislation requiring accountability and transparency for private schools that take taxpayer-funded vouchers.

Sump-McLean also noted that 28 charter schools in the state are deemed low-performing and that the county’s charter schools, with the exception of Pine Lake, a public charter school, perform at a lower level than MGSD and Iredell-Statesville Schools.

Marsh added that many of North Carolina’s education dollars are going to out-of-state for-profit companies that operate charter schools.

Finally, Mauney presented the system’s concerns about the inability to charge developers with impact fees to fund school costs impacted by growth, the need for money to build new facilities, and the failure of the legislature to get solve the budget impasse with the Gov. Roy Cooper.

Sawyer reminded attendees that she is only one voice in the Senate but that with 15 not seeking re-election, she foresees a “refreshing” of the Senate.

She said that Iredell County school systems do amazing things with one of the lowest county tax rates in the state.

Sawyer warned that some organizations, including the N.C. Association of Educators, hurt educational causes when she and others receive threatening calls and must fight the spread of misinformation.

Sawyer urged teachers and their representatives who want to sway lawmakers to seek middle ground and to bring thoughtful, helpful responses along with factual information and statistics to support their requests.

Commissioner Robertson agreed, saying that the tenor of state-level teacher organizations is to divide, not unify. He urged educators and school officials to “divorce themselves from lines in the sand and discuss and craft solutions at the local level. We need to resist the filter of polarization at the state and national level and try to influence things locally to seep up to the state level.”

Fraley said that the budget logjam may break in the next few weeks since discussions are showing some promise. Saying he wanted to avoid “the blame game,” Fraley called the budget legislators passed “one of the best in years” but acknowledged that they have the responsibility to get it over the finish line. 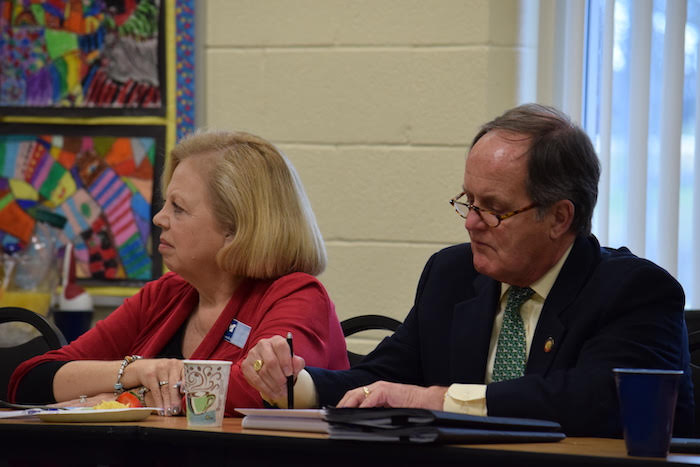 In regards to the NCAE, Fraley welcomed the productive conversations he and Sawyer have had with the organization but said that the organization has not prioritized its demands, the total of which would cost an unrealistic $5 billion. Fraley noted that the entire state budget is only $24 billion.

Fraley urged the NCAE to come in and talk realistically about how to achieve its goals. He also stated, in his personal opinion, that following the small group within NCAE urging a strike would result in a “very negative” reaction from the legislature.

Legislators, he said, have raised budget spending from 2.5 to 3.5 percent, plus population and inflation adjustments of .25 to .50 percent, each year. Prior to the recession, the state increased spending 7.25 to 7.75 percent each year for 10 years, increases that are not sustainable.

Fraley said the legislators now strike a more balanced approach. He said tax cuts may need to be reconsidered but he noted that 600,000 people in North Carolina were taken off the tax rolls by increasing the standard deduction by $6,000 to $21,000 or $22,000 which positively impacts a lot of lower income households

After serving on the education committee during his tenure in Raleigh, Fraley assured the attendees that he never saw a decision made based on the influence of lobbyists. “We focused on what was best for students,” he said.

Fraley also explained the rationale for teacher raises since the recession. After paying off $2.6 billion in unemployment and Medicaid benefits required by the federal government, legislators first addressed beginning teacher pay, followed by mid-career teachers last year and then veteran teachers and principals this year.

After this budget year, Fraley believes the legislature will return to across-the-board raises. Raises averaged 4.5 percent for the last 5 years, and Fraley said asking for anything higher was probably unrealistic with other budget demands.

Fraley believes restoring master’s degree pay would probably pass the N.C. House but added that educational research has shown a “disconnect” on the impact of a master’s degree on student learning.

The notion that longevity pay was taken away is not accurate, according to Fraley. Instead, that money was rolled into teacher’s compensation. Teachers actually received more actual dollars using this method than with longevity pay, added Fraley, but he asked Haas to provide him any examples she could find of teachers harmed financially for him to take back to the legislature for examination.

Fraley said the legislature is hiring an outside consulting firm to examine how education is funded in North Carolina after attempts to talk with education stakeholders failed to produce reform. The current 37 buckets of funding is “ridiculous,” he said.

Teacher preparation is another area that legislators plan to study. Some schools are graduating teachers who are not prepared for the classroom. “We need more consistency and continuity” in teacher preparation, added Fraley.

Fraley also said that charter schools are not going away, but he dislikes the for-profit charters that have come to the state. “We need to change the dialogue. We need to find out why kids are going to those schools and what we can do to change that,” he said.

Robertson noted that charters were originally supposed to be “learning labs” to figure out how to improve student performance. He added that sharing data on performance is important. “When that happens, if public schools are outperforming charters, it will be seen. If charters are for segregation by race or income, that will be seen.”

“We don’t want to break the public school system with two sets of rules,” he added.

Mayor Atkins said that meetings of the town and MGSD boards have been productive, creating greater awareness of the need for impact fees and road improvements around schools. “It’s imperative that we work collaboratively,” he said.

Atkins is excited about this dialogue with the school board members “because as we continue to grow, the pressure increases on schools.”

Sawyer noted that many towns in North Carolina are struggling to pay employees or to fix broken sewer systems. “If growth is our biggest problem, let’s pat ourselves on the back,” she said.

Mallory talked about steering K-14 education to prepare students with Career and Technology Education courses to fill the increasing number of well-paying jobs in advanced manufacturing and other skilled professions. “We must prepare students for jobs that do not even exist yet.”

The legislature’s decisions to add more academic courses only hurts students’ ability to take the CTE courses and meet the needs of businesses and students. Mallory said that 40 academic teachers will soon spend a week learning about area businesses and getting ideas on how to incorporate real world situations in their lessons.

“We need to stitch together stakeholders in business, in economic development, in government, and in schools to create the most relevant education for kids,” he said.

Houpe urged the community to support the school bond on March 3 because “we don’t have enough revenue streams to do what we need to do” to build needed schools. He has worked tirelessly to get the facts out about the capacity bond and has “fought endlessly on Facebook to correct misinformation.”

“If misinformation becomes the perception, it might become people’s reality,” Houpe said.

Hyatt closed the session by saying it is “encouraging that folks from different quarters can come together to talk about common concerns. Together we can solve many problems, but it takes everyone’s participation.”