More than 20 residents voiced strong objections during the Town of Mooresville Board of Commissioners meeting on Monday to developer Rick Howard’s plan to build a pair of eight-story buildings on an 8-acre site off Alcove Road.

The proposed hotel and condos, they said, would be in conflict with the harmony of the area, add to the corridor’s transportation woes, put a strain on emergency services and schools, and set a horrible precedent for future development along the shores of Lake Norman.

“You will see this building forever. The lake will forever be changed — forever,” one Queens Cove Road resident told the board. “It is up to you to protect the lake.”

Town commissioners listened attentively and heard their pleas, but instead of denying Howard’s request for a conditional-use permit to exceed the five stories allowed by the town’s zoning ordinances, the board granted approval for two six-story buildings.

That decision followed a nearly two-hour quasi-judicial hearing in which members of the public were sworn in and allowed to provide testimony about their concerns.

The opponents included many long-time residents, among them a developer, a general contractor, a lawyer, retired assistant fire chief, landscape architect, and an operational risk consultant.

They focused their comments on the development’s potential to disrupt the natural harmony of the area, showing photos of the views from their porches. Under the law, if the board found that the development was not in harmony with the area, it could not approve the conditional-use permit.

While town staff concluded that Howard’s proposed use of the property was permissible under the town’s One Mooresville comprehensive plan, opponents said it was contrary to the vision outlined in the Alcove Road small area plan.

“Why do we need eight stories and two buildings?” asked Susie Phillips, who lives off Kings Crest Drive. “One for the rich people and one for the people coming to visit them?”

Only Dan Brewer, the site engineer for the project, spoke in support of the conditional-use permit. He told the board that the only way to get the density desired for the development was to “go vertical,” adding that the hotel and condos would be in harmony with other recently approved hotels in the area.

But Brewer also conceded that public opinion was not in his favor and that Howard could make the development work with six- or seven-story buildings. He asked the board to make a decision on the request during Monday’s meeting.

While the board’s decision may have seemed like a victory for the nearby residents — who lamented the loss of their scenic lake views and the light pollution caused by increased residential development along the lake, the board did not set a height limit on the two structures.

In addition, Howard’s Langtree Group won a victory during a second hearing when the board agreed that the developer could increase the number of residential units on the property from 319 to 388 in exchange for reducing the amount of square footage devoted to commercial space.

Brewer said that the developer’s architect would likely design smaller units to fit 388 units into the permissible six stories.

Howard must submit a concept plan to town staff for approval before construction begins. He also must install turn lanes and meet other conditions of a traffic mitigation plan. 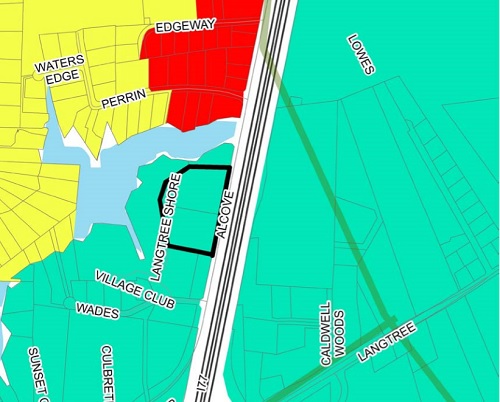