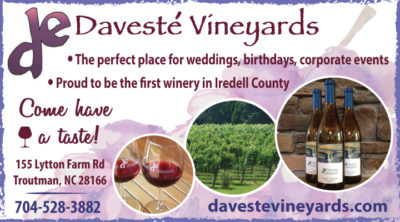 When: Friday, February 28, 7:30 p.m.; Saturday, February 29, 7:30 p.m.; Sunday, March 1, 2 p.m.
Where: The Rotary Auditorium, Mitchell Community College, 500 W. Broad Street, Statesville
Details: Theatre Statesville’s fourth production of the season is Pulitzer Prize-winning drama, “Proof.” The central character, Catherine, has inherited her late father’s mathematical brilliance, but she is haunted by the fear that she might also share his debilitating mental illness. She has spent years caring for her now-deceased father, and upon his death, she feels left alone to pick up the pieces of her life without him. Caught between a new-found connection with Hal, one of her father’s former students, and the reappearance of her sister, Claire, Catherine finds both her world and her mind growing increasingly unstable. Tickets are $15. Learn more at www.theatrestatesville.com

When: Friday, February 28, 7 p.m.; Saturday, February 29, 2 p.m.
Where: Lake Norman High School, 186 Doolie Road, Mooresville
Details: Everyone loves Matilda! Inspired by the genius of Roald Dahl and based on the Tony Award-winning musical, Matilda is a captivating masterpiece packed with high-energy dance numbers and catchy songs. It revels in the anarchy of childhood, the power of imagination and the inspiring story of a girl who dreams of a better life. Children and adults alike will be thrilled and delighted by the story of the special little girl with an extraordinary imagination! Tickets: Adults – $12, Seniors and Students – $10, Under 5 – free.

When: Friday, February 28, 7 p.m.
Where: 155 Lytton Farm Road, Troutman
Details: NC songwriter & cover musician Dennis Brinson has a wide ranging Alt-Country/Americana/Easy Rock setlist. No Cover Charge. Wine, Craft Beer, and a variety of sodas available for purchase during event. The Pavilion is a event space located on a hill behind the Tasting Room. Seating is available but fills up fast. Picnic baskets/Crock pots are allowed.

The Defense of Fort Dobbs

When: Saturday, February 29, 10 a.m. to 4 p.m.; Sunday, March 1, 10 a.m. to 3 p.m.
Where: Fort Dobbs Historic Site, 438 Fort Dobbs Road, Statesville
Details: On February 27, 1760, the garrison of Fort Dobbs engaged in a bloody, confusing, night-time skirmish with Cherokee warriors. This living history event will give visitors a glimpse of what life was like for those involved through on-going displays of camp and barracks life, as well as scheduled musket and cannon firing demonstrations. Admission is free, but $2 donation is suggested.

When: Saturday, February 29, 9 a.m. to 1 p.m.
Where: 205 S. Tradd Street, Statesville
Details: Join us for this fundraiser. Proceeds will help fund the eighth-grade class trip to New York City.

When: Saturday, February 29, 10 a.m. to 6 p.m.
Where: Daveste Vineyards, 155 Lytton Farm Road, Troutman
Details: Complimentary wine sample to taste. Bottles and glasses are available to purchase. Edelweiss wine has a floral nose accompanied by flavors of ripe pineapple, pear and mandarin orange. Delightfully sweet & crisp, this wine is perfect for pairing with dessert or sipping on its own. This grape was harvested late July 2019 at James Michael Vineyards in Harmony. James will be on site to showcase specially blended jellies from his harvest of Edelweiss grapes.

When: Saturday, February 29, 3 p.m.
Where: Iredell County Public Library, 201 N. Tradd Street, Statesville
Details: Anna, Elsa, Kristoff, Olaf and Sven leave Arendelle to travel to an ancient, autumn-bound forest of an enchanted land. They set out to find the origin of Elsa’s powers in order to save their kingdom.

When: Saturday, February 29, 8 p.m.
Where: Twisted Oak American Bar & Grill, 121 N. Center Street, Statesville
Details: It’s a Leap Day Party! Come early and have some dinner then get ready to dance the night away! Tickets are $10.

When: Saturday, February 29, 7 p.m.
Where: Mooresville High School Performing Arts Center, 659 E. Center Avenue, Mooresville
Details: When Winnie Foster discovers the magical secret of the Tuck family, she embarks on an extraordinary adventure that will change her life forever. Take a journey you’ll never forget in this daring new Broadway musical about love, family and living life to the fullest. Tickets are $10.

When: Sunday, March 1, 4 p.m.
Where: Iredell Memorial Hospital, 557 Brookdale Drive, Statesville
Details: Expectant parent tours give you the chance to see the LDRP rooms and other patient care areas. Held on the first Sunday of every month, other than holidays.