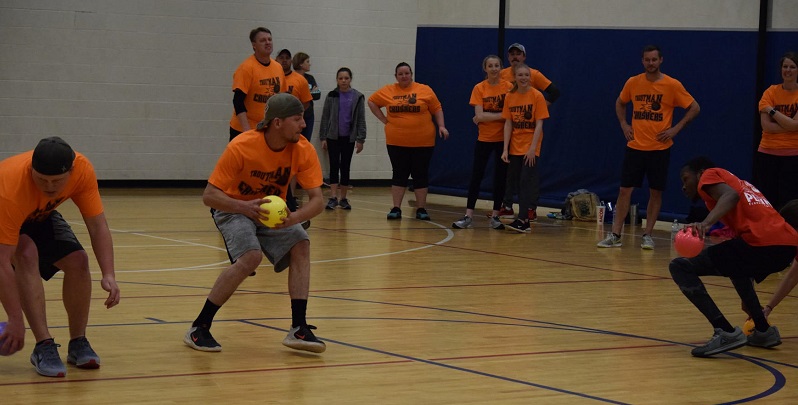 Get a team together and join the free fun in a “friendly” dodgeball tournament on Saturday, February 22, sponsored by GET FIT IREDELL. Check in opens at 9 a.m. and games begin at 10 a.m.

Rosters are made up of six to 10 players over the age of 16, with six competing at any time. Subs may enter in between games or in cases of injury.

Teams must be co-ed with at least two female players starting the game for each team. In event of injury, the team can play with five team members, with one being female.

The tournament is limited to 24 teams, so register now!

The game will be played on an official volleyball court with rhino skin soft balls provided by the Statesville Recreation and Parks Department.

The object of the game is to eliminate all opposing players by getting them “OUT.” This may be done by:
1. Hitting an opposing player with a LIVE thrown ball.
2. Catching a LIVE ball thrown by your opponent before it touches the ground. When a defending team catches a LIVE ball, a team member may return to the game, and must be in the order they were eliminated.
3. Headshots: Headshots occur when a defenseless player is hit directly in the head by a high thrown ball while not in the act of trying to dodge, deflect or catch a ball. Any thrower committing a headshot will be deemed “out.”
4. Blocking: Players can defend themselves by blocking a ball in flight with another ball but must retain control over the ball they are blocking with. A player dropping or losing possession of the blocking ball is deemed “out.” Any blocked ball rebounding off another ball is considered live. Any player hit by the rebounding ball is deemed “out.”

Definition: LIVE: A ball that has been thrown and has not touched anything, including the floor/ground, another ball, official or other item outside of the playing field (wall, ceiling, etc.).

Game begins by placing six dodgeballs along the center line – three on one side of the center hash and three on the other. Players then take a position behind their end line. Following a signal by the official, teams may approach the centerline to retrieve the balls. This signal officially starts the contest. Teams may only retrieve the three balls to their side of the center hash. Once a ball is retrieved it must be taken behind the attack-line before it can be legally thrown.

TIMING AND WINNING A GAME

The first team to legally eliminate all opposing players will be declared the winner. A three-minute time limit has been established for each contest. If neither team has been completely eliminated at the end of the three minutes, the team with the greater number of players remaining will be declared the winner. If both teams have the same amount of players at the end of regulation, the next team to eliminate an opposing player wins.

5-SECOND VIOLATION
No team can control all six balls on their side of the court for more than five seconds. This also applies to teams in a tie situation. More details can be found in the NADA.

During pool play or regular-season matches, rules will be enforced primarily by the “honor system.” Players will be expected to rule whether or not a hit was legal or whether they were legally eliminated.

All contests will be supervised by a court monitor. The court monitor’s responsibility will be to rule on any situation in which teams cannot agree. The referee’s decision is final.

1. Understand, appreciate and abide by the rules of the game.
2. Respect the integrity and judgment of game officials and staff.
3. Respect your opponent and congratulate them in a courteous manner following each match
whether in victory or defeat.
4. Be responsible for your actions and maintain self-control.
5. Do not taunt or bait opponents and refrain from using foul or abusive language.

♦ Contact Kali Moore at the Statesville Fitness and Activity Center for more information – 704-878-3429.

♦ Registration forms and rules are available on the Get Fit Iredell website – click on the event (www.getfitirredell.com).

♦ Please return the completed registration and waiver form to Moore via email kbmoore@statesvillenc.net or fax 704-871-0008 by February 20.