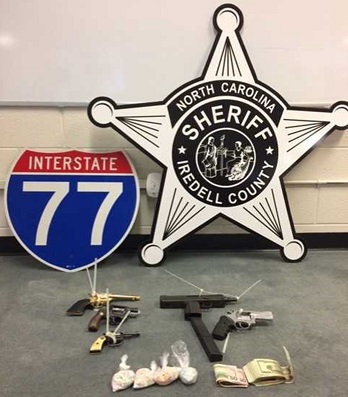 A New York man face drug-trafficking and weapons charges after a vehicle he was traveling in was stopped for a traffic violation on Interstate 77 by Iredell County Sheriff’s Office deputies.

Deputies assigned to the ICSO Interstate Criminal Enforcement Team were patrolling on Interstate 77 north in the area of Mile Marker 61 on Saturday, April 11, when they stopped a 2016 Chevrolet Impala, Sheriff Darren Campbell said in a news release.

After approaching the vehicle, deputies spoke with the occupants, including 36-year-old Jason Roldan of Rochester, N.Y. The passengers told the deputies they were traveling from Monroe, Ga., to Rochester, according to the news release.

After K-9 Abby was called to the scene to assist with the investigation, she alerted for the presence of illegal narcotics in the vehicle, Campbell said.

During a search of the car, deputies located four bags of MDMA, also known as ecstasy, hidden inside of tennis shoes in the trunk of the vehicle, according to the news release. The four bags contained 181 grams of MDA, or approximately 400 dosage units, Campbell said.

Deputies also found five firearms concealed in a suitcase. One of the guns had been reported stolen in Louisiana, Campbell said. Deputies seized the weapons and $1,300.

Roldan appeared before Magistrate Thompson, who issued a $350,000 secured bond on these charges.