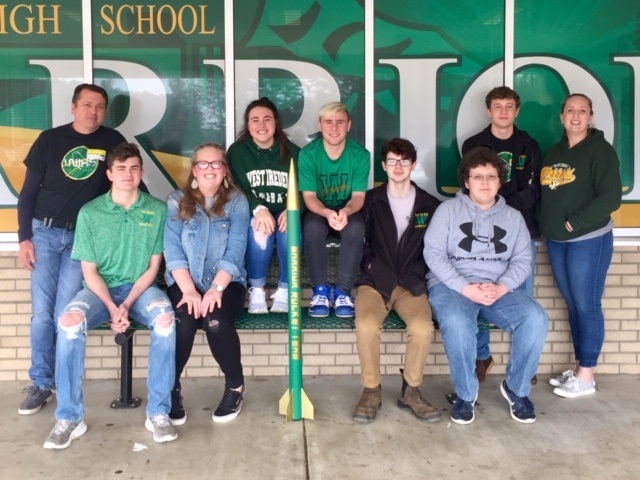 West Iredell High School’s Rocket Team will join 99 other teams from across the country in Huntsville, Ala., for NASA’s Student Launch Initiative on April 1-5 in Huntsville.

The team is led by Doug Knight, an assistant professor of engineering physics at Lenoir Rhyne University. Knight and West Iredell teacher Allison Chouinard work with the team.

“These kids are incredibly smart, driven and motivated. Critical thinking and problem solving are necessary skills that are difficult for high school students to learn and have,” Chouinard said. “These kids being able to engage in these types of engineering events and projects really fosters their ability to do that.” 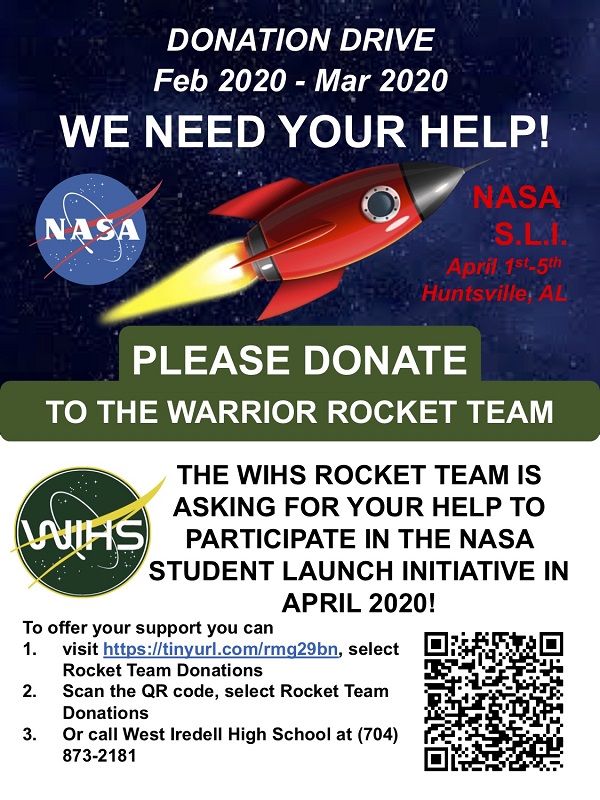 Last year West Iredell’s Rocket team competed in The American Rocketry Challenge (TARC). Among the 800 participating teams, West Iredell was among the 100 that made it to nationals in Washington, D.C.

“Our team placed 12th at Nationals. The top 25 placing teams from TARC are invited to participate in NASA SLI the following year,” Chouinard explained.

“We are the only high school team from North Carolina who accepted the invitation this year based on our standings from last year’s TARC competition,” she added.

Because it is a small group, the team relies heavily on donations from the community. They have already held a couple of fundraisers to help with expense travels, but are still in need of help.

To offer support, you can visit https://tinyurl.com/rmg29bn and select Rocket team donations. You can also call West Iredell at 704-873-2181.

The NASA student launch program began as a way to encourage students to study Science, Technology, Engineering and Math by getting them out of the classroom.

Students build, design and test reusable rockets carrying a scientific payload they create. The goal: Produce a rocket that climbs one mile above ground level before drifting safely back to earth.

There are college and high school divisions. For the high school participants, work begins nearly a year before the competition. They must submit proposals to participate in the program.

Once teams are accepted, their work begins.

The Journey to Marshall Flight Center

Senior Jacob Houston said that the team began working on the project at the beginning of the school year.

The first rocket, he said, took three months to build. It was made out of fiber glass, featured a 3D-printed nose cone and was about 9½ feet long and weighed more than 20 pounds.

After a crash landing, however, the team had to rebuild their rocket using a different material. The next rocket will be about a foot shorter, Knight explained.

The team has put a lot of time into the project, working on weekends and after school. The program fosters hands-on skills involving math, engineering and other skill sets.

“We’ve worked closely with NASA engineers (from Marshall Space Flight Center in Huntsville) and talk with them via video conference to give a report of our progress and receive feedback,” said senior Ethan Levitt.

“It’s unlike anything high school students in the state are doing with STEM. We’re the only high school in the competition and we’re a small rural town,” he added.

Through their collaboration, students learn about the engineering design process as NASA engineers walk them through step-by-step, telling them what to expect along the way.

In addition to participating in the teleconferences, students brushed up on their writing skills as they completed a detailed report documenting their design. The full report submitted by the West students was more than 100 pages.

While students get a taste of what it’s like to build things and be associated with the space program, NASA also emphasizes the importance of safety, Levitt explained.

Making sure nothing goes wrong on the day of a launch is important as mishaps could result in injuries. NASA puts safety first and has really emphasized why it’s so critical, he added.

While at NASA SLI, the West Iredell students will get to meet their engineer mentor at the Marshall Space Flight Center. They will also have the opportunity to participate in a rocket fair, do some sight-seeing and attend other events.

“It’s helped us bond. I think of them as my friends now,” said Knight.

The friends have learned about teamwork, the importance of meeting deadlines, leadership and their future careers.

“I’m very fortunate to know what I want do in life. Most kids don’t know what they want to do,” Morron said, adding that he wants to be a biomedical engineer.

The others want to pursue careers in aerospace engineering and mechanical engineering.

The team also hopes to inspire the next generation of builders and have performed community service projects at local elementary and middle schools to expose students to STEM and rocketry. 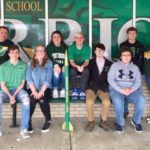 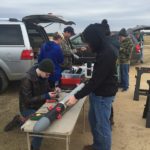 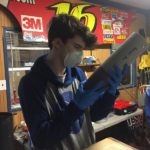 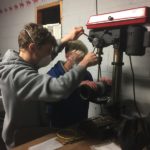 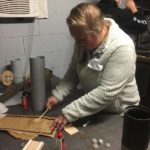 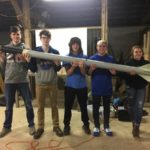