Jessica Prichard is afraid of heights. And she’s not a big fan of flying either.

But when she jumped out of an airplane in Rowan County last weekend with her long-time friend Jordan West Barker, it seemed like the most natural thing in the world. The fact that they were accompanied by their loved ones made it even more special.

The Statesville High grads share a long history of being there for each other during some of their lowest moments, when their separate battles with addiction damaged their most prized relationships and jeopardized their health and well-being.

So it seems fitting that they were side by side as the Piedmont Skydiving plane climbed to an altitude of 12,000 feet and the doors opened before they began the thrilling descent to the grassy field below at Mid-Carolina Regional Airport.

The flight and tandem jump lasted all of 25 minutes. But it marked a major milestone in two women’s battles to remain sober, live their lives to the fullest and support each other.

A Special Friendship: ‘We instantly clicked’

Jordan and Jessica have been friends since 2001, when they were freshmen at Statesville High School. They shared a journalism class and were both interested in theatre.

“We met and we instantly clicked, and it was like we were friends our entire lives,” Jordan said. “We were best friends all through high school.”

They attended church together at Grace Baptist Church, vacationed together and went on mission trips together, including a hurricane relief trip to Fort Myers, Fla., where they helped repair roofing damage.

“We are the kind of people just because we have not done something doesn’t mean we are not going to try it,” Jordan said.

That included helping with roofing work in Florida and drinking alcohol in high school, which Jordan described as normal teenage behavior at the time.

Unfortunately, for both women, those first drinks were the beginning of a long, slow freefall into what would become a years-long battle with addiction that threatened to rob them of the relationships they value the most.

After high school graduation Jordan moved to Asheville and Jessica headed off to N.C. State University in Raleigh. Although their lives had taken them in different directions, the friends remained in regular contact. They called to share major news and milestones.

And they both kept drinking.

Jordan’s Battle: ‘It was like getting smacked in the face’

After Jordan’s oldest son was born in 2010, her parents, Gary and Patti West, warned her that she was genetically predisposed to addiction. While her brothers had fought their battles with addiction, Jordan said she viewed herself as a social drinker. Like other young moms, she viewed a couple of glasses of wine each day as harmless. She remembers it being referred to as “mommy juice” and seeing T-shirts normalizing that type of behavior.

She pushed back against any notion that she had a drinking problem or addictive personality. “I was like, ‘That’s not me.’ I took care of my family. I worked 40 to 50 hours a week,” she said.

But soon Jordan and her husband found themselves in financial trouble and their relationship became strained.

Alcohol, she said, helped her deal with the stress and ease the pain. In the summer of 2015, it cost Jordan her job when she got caught drinking at work.

“From there, it spiraled to where I was drinking every single day while my children were at school and my husband was at work,” Jordan said.

She wasn’t just drinking a couple of glasses a wine in the afternoon. She frequently consumed entire bottles of whisky before passing out and then woke up before the kids came home from school.

Despite her best efforts to keep her life together, she wasn’t fooling those closest to her.

“One day my husband said, ‘Quit drinking or the children and I are leaving,’ ” Jordan recalled. “That was the push I needed.

“It was like getting smacked in the face and getting pushed down and then getting kicked in the stomach.”

After that conversation with Russ, Jordan spent a few days in detox and then attended 90 Alcoholics Anonymous meetings in 90 days. The only other option, according to her doctor, was inpatient treatment, and she did not have health insurance at the time.

Those AA meetings were transformative.

“It blew my mind,” Jordan explained. “I was surrounded by people who knew exactly what I was feeling. … It was like this instant feeling of relief that I wasn’t alone anymore.”

One of the first people she called when she was sober for Jessica.

Jessica’s Struggle: ‘Alcohol and I had a good relationship for a long time’

For Jessica, the path to addiction was slow.

“It wasn’t bad for me for a very, very long time,” Jessica said. “Alcohol and I had a good relationship for a long time.”

At N.C. State, Jessica drank like a typical college student. After college, she enjoyed an adult beverage after work and on date nights. Then there were the regular trips with friends to breweries and wine tastings.

“One day you wake up and realize alcohol is the biggest part of your life, and you don’t know how to get out of it or how you got there,” she said.

“It became a way to escape and numb and not feel the concern that I was so reliant on a substance.”

Jessica’s mom saved her life. That’s not an exaggeration. About a year ago she came to her daughter’s house and grabbed her hand and sat her down.

“You have two options,” her mother said. “We can go to the hospital together or you can go in a cop car.”

Jessica knew then that “the gig was up.”

She spent 12 days in the Intensive Care Unit and is grateful that she doesn’t remember most of the details of that experience.

There were times, Jessica said, when her doctor expressed concerns about whether she would live. She is sorry that her mother had to endure that.

“I can’t image the amount of fear and pain she had to have.”

During the year before she was hospitalized, Jessica drank about a bottle and a half of wine per day. Every day.

By then she was “actively” trying to hide the amount she was drinking. She isolated herself so others wouldn’t know.

“I knew if anyone knew how much I was drinking, it had to stop,” she explained. “My brain couldn’t fathom what that would look like.”

Her now ex-husband reached out to her mom and asked her to intervene.

“My mom is one of the few people who has always been consistent and can really put a hard mirror in front of my face, and she won’t take no for an answer,” Jessica explained. “I knew when she showed up that change was going to happen.”

One of the first people Jessica called from the ICU was her long-time friend Jordan.

“I said, ‘I’m in trouble, I’m an alcoholic and I’m in the hospital,” Jessica recalled.

Jordan, whom Jessica calls her “sobriety Sherpa,” called every day to check on her friend and encourage her.

The past year has been a challenging journey, but it’s also been “beautiful” as she’s begun to experience feelings that she had been drowning in alcohol for years.

“Everything feels ginormous, or terrifying — or incredible,” Jessica explained.

She regularly attended AA meetings, leaned on her friend and her mother during the difficult days, and tried to pay attention to how she responds to people and situations that tried to avoid when she was drinking.

Life is short, she said, and relationships can be fragile.

“My life is wholeheartedly better than it was. I am significantly happier. I am working again. I have a full-time job that gives me satisfaction. And I am building back relationships that I really could have lost.”

When Jessica was about halfway to her one-year sobriety anniversary, Jordan asked her how she wanted to celebrate. Despite her fear of heights and aversion to flying, Jessica decided that jumping out of an airplane with her friend and floating down to earth would be a great way to mark the milestone.

“I figured that there was a period of time where I thought sobriety was not a possibility,” she said. “So who is to say that someone who is an anxiety sufferer — who does not like to fly — can’t jump out of a plane?”

They did it together

On Sunday, July 31, Jordan and Jessica – and a small contingent of their loved ones, including Russ and Gary and Patti and Jessica’s mom and boyfriend Drew – arrived at the skydiving hut at the small Rowan County airport about 10 a.m.

After the requisite waivers were signed and the small group of jumpers were fitted with their gear, the flight was delayed by more than hour by low-hanging clouds. There was a nervous energy in the air along with a little lightning, but also a deep appreciation for what these two women had overcome to get to this date.

About 12:40 p.m., after the skies over the airfield cleared, the small plane took off and began its climb to 12,000 feet. About 1 p.m., the colorful parachutes began appearing overhead, blown by a midsummer breeze out of the west.

It was everything Jordan and Jessica hoped it would be.

“That was the most surreal thing I have done in my entire life,” Jessica said. “I thought I was going to be terrified, but I laughed and smiled and had the best time of my life. I would do it again in a heartbeat.”

“It was like nothing I ever experienced,” Jordan added. “I was a little bit nervous right when we were scooting up, but then we jumped and it was crazy. It was the most amazing experience ever. It was beautiful.”

Jessica touched down a couple of minutes before Jordan. After extricating themselves from their parachutes, the two women hugged their loved ones, and then shared a warm embrace with each other.

They did it. Together. And that meant everything. 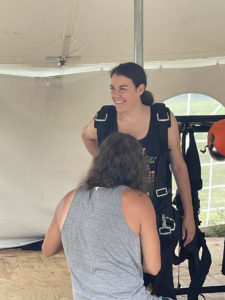 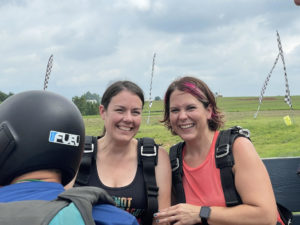 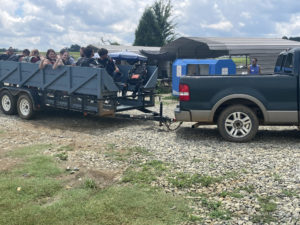 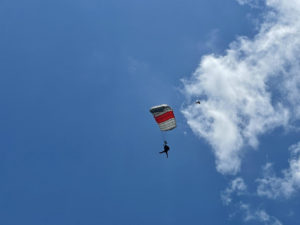 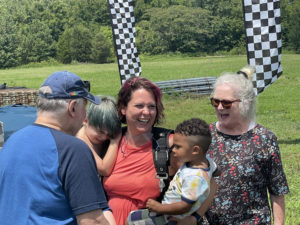 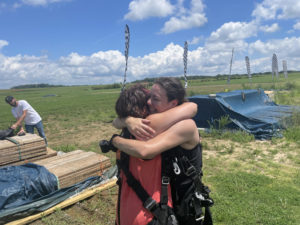 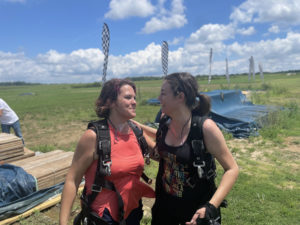 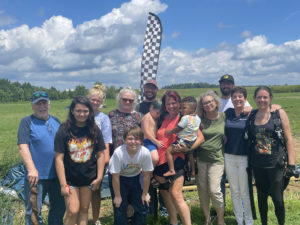