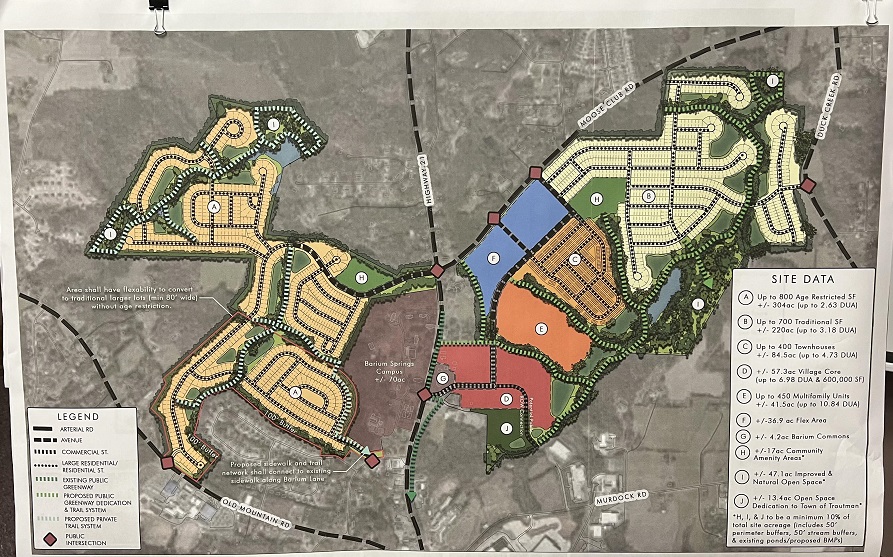 Thirty-five residents gathered on Thursday night to hear a presentation on the proposed 778-acre Wakefield development at the former Barium Springs property that will bring 2,200 single-family, multifamily, townhome and apartment residences to the north side of Troutman.

Developers are seeking a recommendation for the property to the newly established mixed-use zoning at Monday night’s Planning and Zoning meeting, followed by the consideration of the developers’ annexation and rezoning request by the Town Council on September 8.

Robert Davis, part of Prestige Corporate Development’s Acquisition, Development, and Entitlement section, said the “village concept” commercial buildings would be roughly three times that of Birkdale in Huntersville, with 600,000 square feet of commercial space planned on 60 acres (about 20 percent more land than Birkdale).

Davis said the shopping area would be anchored by a major grocer, noting that a 51,000-square-foot Publix anchored their Village at Sherrill’s Ford commercial section.

The total buildout will take eight to nine years, with developers making substantive improvements at their expense in the town’s public utilities and affected roads as directed by the traffic impact analysis.

The developers are also honoring the history of the site by preserving the Gracie Building, which houses the Heartstrings program. Historical names will be used for streets and other parts of the development.

The “Wakefield” name comes from the last name of the first pastor at The Barium Springs orphanage.

Children’s Hope Alliance, which sold the land to the developer, is retaining 70 acres of campus area to continue its services to the community.

In the Springs at Wakefield, developers are planning 800 age-restricted (over-55) homes (down from 1,000 in the initial plan) on 300 acres circling behind the CHA campus from Old Mountain Road to the northwest of the campus.

Most of the homes will have garages. Possible amenities include a club house, pool, pickle ball or tennis courts, and walking trails.

On the east side of Highway 21, the Brook at Wakefield plan includes 700 single-family homes (up from 650) on 220 acres (an increase from 126 acres) bordering Moose Club Road and Duck Creek Roads. Possible amenities include a clubhouse/pool, dog park, and walking trails.

The Grove at Wakefield plan 400 townhomes (down from 500) on 84 acres (up from 35 acres) and will share some amenities with the adjoining Brook development.

The Flats at Wakefield plan remains at 450 apartments on 41.5 acres (up from 35) with its own pool and other amenities.

Fifty-seven acres are dedicated to the village core commercial area, 42 acres for Barium Commons (up from 3 acres), 17 acres for community amenities (trails, ballfields, etc), 47 acres of improved natural open space, and 13 acres donated to the town to create a community amenity.

Thirty-seven acres (up from 15 acres) of flex area, once planned for a school, may be dedicated to other uses since the school system’s current plan for a middle school is adjacent to the South Iredell High School campus, with the current middle school becoming 3rd-5th grade and Troutman Elementary becoming a K-2 school.

Instead of donating the 37 acres to the school system, the developers may contribute toward the building of the new middle school. Critcher said discussions are ongoing with I-SS.

The development will include roads and sidewalks constructed according to town ordinances.

They are currently designing a signage master plan to create that cohesive feeling in all sections of the project.

In the green spaces, Critcher said the plan emphasized “utilizing some of the existing natural conditions where streams are and providing some of these open spaces where they naturally fit.”

Critcher provided a summary of other changes from the original plan, including shifting an intersection to reduce traffic adjacent to Barium Seasons Village (BSV), enlarging the buffer to 100 feet adjacent to BSV, and shifting lots and roadways to increase the separation with BSV.

Other changes involved moving an amenity center to reduce lots next to an adjacent property line, removing the school site and adding the acreage to create a flex area, shifting townhomes and lot layout to increase separation, and donating 13.4 acres to the town.

Davis added that all facade materials are limited to brick, stone, hardy board, cementitious siding, wood siding or shingles, or stucco. Vinyl can only be used on windows, soffits, and trim, said Davis.

Utilities will be installed underground.

In response to an increased traffic question, Davis said that if the traffic impact analysis indicates an intersection is impacted by 10 percent or more, the developers must address and improve the area. All improvements must be completed before the first certificate of occupancy is issued.

Some concern was expressed about the Old Mountain Road entrance to the development being across from the SIHS bus entrance/exit. Davis said that the TIA could shift the entrance, add turn lanes, or mandate other changes.

He also reminded attendees that this entrance was to the age-restricted section, in which fewer residents would have school-age children and would be less likely to traveling during school opening hours.

Another attendee asked about the development agreement with the town, wanting to know what Prestige asked the town for in terms of utilities and how much it would cost taxpayers. Davis assured attendees that it was the other way around — that the town told Prestige what it had to do to install and pay for utilities for the development’s homes to get approval.

The only thing Prestige asks of the town is that it has water and sewer capacity to serve the development. The developer is responsible to pay for all utilities for the homes, including adding additional sewer lift stations, a water tower, and all sewer and water lines needed.

Developers also promised one questioner that they will preserve as many of the existing mature trees as possible, noting that the town requires a 10 percent tree save, which they believe they will exceed.

Attendees then gathered around one of three stations to ask questions one-on-one, with presenters staying to answer questions and listen to concerns until all had the opportunity to interact with them.

The developers will present the Wakefield master plan to the Planning and Zoning Board on Monday night at 7 p.m. The board will vote to recommend, disapprove, or table the project for 30 days for additional research.

Residents may address the board prior to the vote.

If the project is not tabled, developers plan to present the project to the Town Council on Thursday, September 8, at 7 p.m. for final approval, rejection, or possible tabling of the project.

Residents will have the chance to voice their approval or concerns about the Wakefield project at a public hearing prior to any council vote.