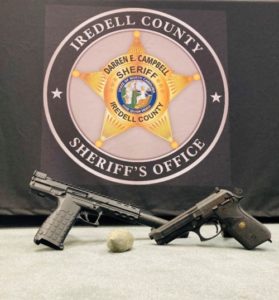 A Georgia man faces felony weapons charges after being stopped by Iredell County Sheriff’s Office deputies for a traffic violation on Interstate 77.

When deputies approached the vehicle, they detected a strong odor of marijuana, according to the news release.

After Olley admitted to having marijuana in the vehicle, the ICE Team conducted a search of the vehicle and found two handguns in the spare tire area in the trunk, Campbell said.

Olley told deputies that he was traveling from Syracuse, N.Y., to Atlanta, Ga., and had purchased two stolen handguns along the way, according to the news release.

Olley was arrested and transported to the Iredell County Detention Center, where he was charged with three counts of Felony Possession of a Stolen Firearm, Felony Manufacture or Possess a Weapon of Mass Death or Destruction, and two misdemeanor drug offenses.

Magistrate Nethkan issued a $500,000 secured bond on those charges.