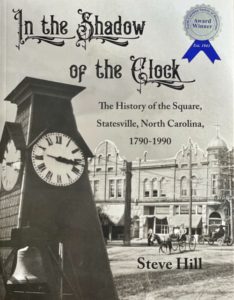 Statesville native Steve Hill was recently recognized by the N.C. Society of Historians at the organization’s annual awards dinner at the N.C. Transportation Museum in Spencer.

Hill’s book, “In the Shadow of the Clock: The History of the Square, Statesville, North Carolina, 1789-1989,” received the 2022 NCSH Award of Excellence, which was presented by the organization’s president, Maxine McCall.

The N.C. Society of Historians was formed in Chapel Hill in 1941. This year’s event marked the 81st annual meeting to recognize individuals and organizations for their work in preserving North Carolina history.