The Troutman Town Council voted to approve Heavy Industrial Zoning for most of the 38-acre North Fork Business Park on Nugget Lane, just off Murdock Road, on Thursday night, despite a Planning Board recommendation against do so.

The vote on the project was continued to the December meeting after a long public hearing in November during which Murdock Road neighbors strongly opposed the project.

After a detailed discussion between council members and developers about the project and council requests for developer concessions, Town Attorney Gary Thomas advised the council to get all conditions requested by the council in writing before voting on the rezoning this month.

Town Planner Lynne Hair told the council that although the present Future Land Use Map recommends Rural-Residential uses for the parcel, the recently revised land use map, also presented to council for consideration at Thursday’s meeting, would designate the Murdock area for light and heavy industrial uses, in keeping with the nearby Walmart and Godley warehouse facilities, Onsrud, ABT, and the cement plant.

She also said “it is unlikely that rural, residential, and agricultural uses will be in harmony with the surrounding areas. Furthermore, with the plan showing the properties to the south across Murdock Road being developed as heavy industrial uses, this makes it even less likely that the category shown on the current land use map is in harmony with the future of the surrounding area.”

The list of conditions included nine uses that developers agreed to exclude and a buffer of 50 feet adjacent to single-family hones, with a five-foot berm with eight-foot trees (at time of planting) built inside an already existing tree line as additional protection.

Any buildings bordering a property line adjacent to the four residential homes are zoned light industrial. The remainder of the park is zoned heavy industrial.

Compliance with the Clean Water Act and Safe Water Drinking Act will also be enforced by the owners’ association. The association will also strictly monitor noise, air and water pollution, chemical disposal and storage, outdoor tire storage (prohibited), and trash and debris removal.

Also, retention ponds will have mitigation measures such as a fountain or fish to keep water clean, moving, and odor-free. It will also be inspected annually to ensure county standards are met. Rain runoff will also be channeled to ponds to protect neighboring properties.

After neighbor Jessica Williams blasted the council during public comment for passing the North Fork project, arguing that the council had disregarded the concerns and health of neighbors, Mayor Teross Young later responded to her comments, saying the issues and concerns of the community did not fall on deaf ears but that decisions may not go the way some community members desire.

Young noted that these deliberations were often difficult, and the council realizes that its decisions affect everyone. However, he also pointed out the positives made possible by the council and town staff despite growth challenges — an attractive community, clean water, safety from the excellent police department, and the great town staff in planning, finance, human resources, customer service, administration, and parks and recreation who work to do the right things for the community every day.

The council unanimously passed the 2022 Future Land Use Map, which serves as a vision and guide for the community, not a binding document or a reflection of current zoning.

Council members asked that four areas be particularly addressed during the revision, including reassessment of the location of commercial and industrial areas that reflect a shift to I-77 interchange areas at Exit 42 and 45.

They also asked for analysis of how the Barium Springs (Barium at Wakefield) development will fit into the land use pattern and to assess residential densities in relation to availability of utilities.

Most importantly, the updated map reflects the goals of the community and council that can be used in making educated land use decisions.

The revision process began in April with the appointment of an Advisory Committee of Town Council members, Planning Board members, staff, and community members. The group began monthly meetings in May to discuss needed changes, the direction of Troutman’s development, and changes to the current land use definitions.

Two public meetings and an online survey for the community to give input also occurred. The committee then worked to create land use classifications that more closely fit the land use goals of the community.

Some of the changes include moving Eastway Drive to Town Center designation and moving the Perth and State Park Road intersection area to Special Lake Use District, the definition of which is also being changed to low-density development of two or three single-family detached homes per acre.

The north side of Murdock Road was also moved to light industrial, and the land use map now covers the northern area boundary along Moose Club Road all the way to I-77.

In the land use definitions, the committee also removed the “clustering” of homes in medium density residential definition. Hair said the next step is to strengthen the UDO to address net density versus gross density in density calculations.

The medium-density definition also requires (instead of “strongly recommends”) that major subdivisions of more than five lots have a variation in lot sizes, housing types, and price points.

The proposed low density residential definition also now specifies that the single-family dwellings must be detached.

A new mixed use definition was also added to reflect the UDO text amendment passed earlier this year. These large tracts are developed as a cohesive, connected, walkable projects with different types of housing (including single family detached and attached and multi-family) and varying densities. They also include commercial and civic use areas.

The Planning and Zoning board unanimously voted to recommend the proposed FLUM and definitions to the council with a few changes, including changing section north of Houston Road next to Sanders Ridge from high density to medium density, changing property next to the proposed high school to civic uses, and the correcting of “greater than three homes” rather than four homes in the mixed use/high density definition.

The next phase of the update process, which includes updating the Unified Development Ordinance to reflect the goals of the 2022 FLUM map and land use definitions, will begin in the new year, according to Hair. UDO text amendments are also being written to redefine open space calculations that affect density calculation and to forbid clearcutting of large land tracts. 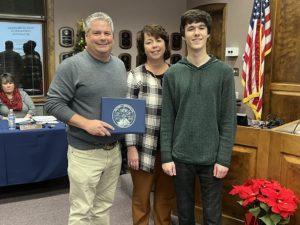 Chris and Francie Carney and their son Will were honored for their $25,000 contribution to build dugout shelters at the baseball fields at ESC Park, which Town Manager Ron Wyatt said would greatly benefit the children of the community on hot days.

Parks and Recreation Director Emily Watson expressed appreciation for the generous contribution to improve community recreation and increase the community’s quality of life.

Mayor Young expressed appreciation “for all you do in our community.”

Chris Carney praised the town, where his family made their residence for years, and his children graduated from South Iredell High School. “Y’all done such a great job with this town. It’s a beautiful place. We wanted to find a way to thank you for what we got from y’all.”

♦ Annexation of 8.43 acres beside Calvary Chapel – Lake Norman owned by the church.

In April, the Troutman Board of Adjustment unanimously approved a special use permit for the renovation of the 16,000-square-foot structure on the property, to be called The Life Center,” on which will be used to temporarily house young women who have aged out of foster care.

The church also plans to build an additional 4,000-square-foot building to house single fathers and their children in need of support.

♦ An annexation hearing date for two acres on Houston Road on January 12.

The Planning and Zoning Board recommended the annexation and rezoning of the parcel, currently zoned Iredell County general business, in November.

Mountain State Investments is constructing a 9,600 square-foot metal building on the property through permits obtained through its current Iredell County zoning designation. The flex space structure will be built out to suit one or more tenants for office/warehouse uses.

Hair assured the council that the building and landscaping would have to meet Troutman UDO standards if annexed, and the developers have agreed to meet all UDO standards and appear before the Design Review Board for approval.

♦ 2023 Town Council agenda briefing and regular meeting dates (the Monday after first Thursday and the second Thursday of each month).

♦ Addition of a closed session to the agenda to discuss a legal matter with Town Attorney Gary Thomas.

♦ The FY 2021-2022 audit report was delayed until the January meeting at the request of Finance Director Justin Mundy to allow numbers to be completely finalized before the presentation.