Despite community concerns about the impact of more development, the Troutman Planning and Zoning Board recommended approval of a 629 single-family home development on 276 acres located on both sides of Weathers Creek Road, just north of Houston Road.

The recommendation followed a spilt vote, with Karen Van Vliet and Mark Taylor dissenting over concerns related traffic impact and density. The Troutman Town Council will consider the project on December 8 after the development plans are finalized.

Urban Design Partners’ representative Paul Pennell said the Ryan Homes development is meant to be a progressive community to suit residents from newlyweds to seniors.

If the development is approved, construction would commence in 2024, with completion scheduled in the 2030-2031 time frame.

The gross density of the project is 2.27 units per acre, which meets the medium density use prescribed for the area in the town’s Future Land Use Plan, although homes will be built on only 163 acres at a density of nearly four homes per acre.

Smaller yards are popular with homeowners because of reduced maintenance and lower environmental impact, according to Pennell.

Forty percent of the property will be open space, with 100-foot stream buffers, stormwater pond areas, HOA maintained trails, and paved greenway areas to preserve natural beauty and trees on the property and to provide residents an enjoyable environment.

Developers also committed to planting two trees on each lot, with lot sizes varying from in width 52 feet in the new families section to 55 to 65 feet in the other two sections (with 40 foot front width permitted on triangular cul-de-sac lots).

Pennell said the development will emphasize walking, biking, and golf carts to reduce traffic. The plan currently includes five bridge crossings over the creek running through the development to minimize environmental impact.

The over 55 age-targeted amenities could include a community garden, walking trail with fitness station, programed green space (with wine park, fire pit, rocking chair patios, and butterfly gardens), and an arboretum.

Pennell noted that amenities are intended to be shared by all Shinn Farms residents and that amenities or proposed placement could change as the site plan is fully developed.

Board Chairman Randy Farmer asked for a commitment to building the pool, cabana, outdoor gathering spaces, playground, and pickleball courts and to commit to building a minimum of six (two per secondary amenity area) of the other proposed amenities, to which developers agreed.

Pennell said that developers were likely committed to the amenities proposed in the presentation, barring unforeseen land use complications or ideas for improved amenities occur.

At an August 9 community meeting, attendees raised concerns about the increased traffic on a narrow road, the one-lane bridge on Weather Creek Road, increased traffic through Sanders Ridge as a road connection is created, and the potential increase in traffic once the nearby proposed high school is built.

Entrance and exit lanes would also be added on proposed development entrances.

The developers agreed to commencing all TIA required road improvements after the 150th certificate of occupancy is issued, rather than the proposed 377th.

Sanders Ridge resident Jon Koethe questioned why developers were not required to do improvements at the Shepherd Road and Westmoreland Road intersections with Highway 21, which will also be impacted by the development.

Randy Goddard of Design Resource Group said these intersections were not required by NCDOT scoping to be analyzed. The TIA is currently under NCDOT review.

Town Planner Lynne Hair noted the town has been notified that NCDOT plans to address the one-lane bridge in the near future.

Several residents, including a mobile home park owner and a church representative, expressed concerns about the need for a buffer between the development and their properties.

In response, Pennell and developers committed to a 25-foot buffer with Unified Development Ordinance compliant plantings around the entire perimeter of the development, except the areas abutting the current land owners, with whom they have a separate buffer agreement.

Sanders Ridge resident Richard Perona worried about cut-through construction vehicle traffic. Pennell committed to waiting until buildout is complete to open the Sanders Ridge connection to ensure construction traffic could not affect the neighborhood, but he noted the town required the road connection.

After discussion of the Shinn Farms proposal and concerns about traffic impacts, board members Randy Farmer, Mark Michel, Darryl Hall, and Barry General voted to recommend the project to the Town Council. 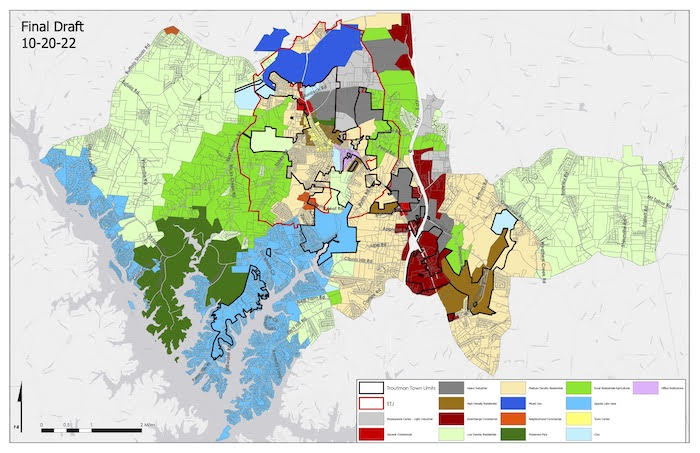 The 2018 Future Land Use Map (FLUM) update is nearing completion, with presentation of the final draft of the proposed map to be presented to Town Council on November 10. The FLUM is a vision and guide for the community, not a binding document or a reflection of current zoning.

The usual five-year revision is occurring a year early because of the increase in development the town is experiencing, according to Hair.

Town Council members asked that four areas be addressed during the revision, including reassessment of the location of commercial and industrial areas that reflects a shift to I-77 interchange areas at Exit 42 and Exit 45.

They also asked for analysis of how the Barium Springs (Barium at Wakefield) development will fit into the land-use pattern and to assess residential densities in relation to availability of utilities.

Most importantly, the revision will provide the planning staff with an updated map that reflects the goals of the community and council that can be used in making educated land use decisions.

The revision process began in April with the appointment of an Advisory Committee of Town Council members, Planning Board members, staff, and community members. The group began monthly meetings in May to discuss needed changes, the direction of Troutman’s development, and changes to the current land use definitions.

Two public meetings and an online survey for the community to give input also occurred. The committee then worked to create land-use classifications that more closely fit the land-use goals of the community.

Some of the changes include moving Eastway Drive to Town Center designation and moving the Perth and State Park Road intersection area to Special Lake Use District, the definition of which is also being changed to low-density developments of two to three single-family detached homes per acre.

The north side of Murdock Road was also moved to light industrial, and the land-use map now covers the northern area boundary along Moose Club Road all the way to I-77.

In the land-use definitions, the committee also removed the “clustering” of homes in medium density residential definition. Hair said the next step is to strengthen the UDO to address net density versus gross density in density calculations.

The medium-density definition also requires (instead of “strongly recommends”) that major subdivisions of more than five lots have a variation in lot sizes, housing types, and price points.

The proposed low-density residential now specifies that the single-family dwellings must be detached.

A new mixed-use definition was also added to reflect the UDO text amendment passed earlier this year. These large tracts are developed as a cohesive, connected, walkable projects with different types of housing (including single-family detached and attached and multi-family) and varying densities. They also include commercial and civic use areas.

The board unanimously voted to recommend the proposed FLUM and definitions to the council with a few changes, including the changing from high density to medium density of a section north of Houston Road and extending to the proposed high school site, the correction of “greater than 3 homes” rather than four homes in the mixed use/high density definition, and verification of the Technology Drive area as being correctly designated on the map.

Phase two of the update process includes updating the Unified Development Ordinance to reflect the goals of the newly created map and land-use definitions after approval by the Town Council.