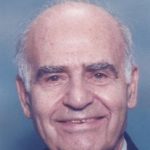 Anthony “Tony” James Miltich embodied the American dream. He passed away peacefully on November 25, 2019, at the age of 104 after a sudden illness.

He was born June 1, 1915, on the Mesabi Iron Range in Virginia, Minn., to Croatian immigrants, Andrew (Andro) and Mary Pope (Mare Papa) Miltich (Miletić). He was the fifth child of six girls and four boys. His older sister “Americanized” his name from Ante Miletic to Tony Miltich when she registered him at school. At a later date, he adopted the more formal Anthony and added his confirmation name James as his middle name. The family, except for the oldest daughter, briefly lived in Croatia.

Tony was a voracious reader and stated that he had read every book in the local library by the time he finished high school. He continued to read throughout his life. He was the first of his family to attend college, attending the University of Minnesota, where he obtained his MD degree. He paid for his education by playing saxophone and clarinet in a small dance band. During WWII, Dr. Miltich was assigned by the War Board to Flint, Mich., to keep the workers assisting with the war effort healthy. He practiced there until his 70’s with his independent practice of General Medicine and Surgery. He was an acute observer of people with an ability to diagnose hypothyroidism by sight. As he talked with his patients, his accent and mannerisms would mirror those of the patient, and he was loved by many. Tony was a member of the Genesee County, Michigan State, and American Medical Associations.

After caring for his patients, his biggest pleasure was bird and big game hunting. He was known for his charisma and charm.

Mass in his honor will be held at St Alban’s Episcopal Church, 301 Caldwell Lane, Davidson, N.C., on Thursday, December 19, at 11 a.m., followed by a reception at the church.

Cavin-Cook Funeral Home & Crematory, Mooresville, is serving the Miltich family. Condolences may be made to the family at www.cavin-cook.com.