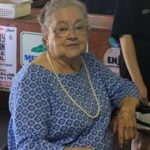 In addition to her parents, she was preceded in death by her husbands, Otis Levan and Leon W. Thompson; sisters, Francis Lowe, Java Morrow and Addie Blankinship; brother, Olin Lowe; and step grandson, Timothy Martin.

The family will receive friends on Wednesday, November 20, from 1 to 2 p.m. with a service following at 2 p.m. at Cavin-Cook Funeral Home Chapel with Rev. Tony Harris and James Lewis officiating. Burial will follow the service at Glenwood Memorial Park.

Cavin-Cook Funeral Home & Crematory, Mooresville, is serving the family of Mrs. Thompson. Condolences may be made to the family at www.cavin-cook.com.