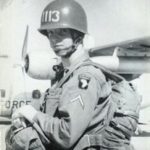 Richard William Ennis, 81, of Mooresville, N.C., passed away peacefully on Wednesday, November 13, 2019, at Gordon Hospice House in Statesville, N.C., after a courageous battle with cancer.

He was born on September 5, 1938, in Brockport, N.Y., to the late William and Ethel Hanna Ennis. Mr. Ennis was a U.S. Army veteran and proud to have been a paratrooper in the 101st Airborne Division. He lived in Holley, N.Y., and worked for Owens Illinois in Brockport, N.Y., until 1985 when the plant closed. He was then transferred to the O-I plant in Winston-Salem, N.C., where he retired in 1993. They moved to Mooresville in 1999. Dick belonged to American Legion Post 529 of Holley, N.Y. He enjoyed doing yard and garden work, weeding and watering all of Eloise’s numerous flowers. Dick loved watching the NY Yankees baseball and college basketball.

In addition to his parents, he was preceded in death by his son, William “Billy” Ennis.

Cavin-Cook Funeral Home & Crematory, Mooresville, is serving the family of Mr. Ennis. Condolences may be made to the family at www.cavin-cook.com.