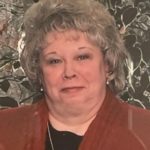 Mrs. Blankenship was born February 9, 1955, in Statesville and was the daughter of the late Haskel Burrell and JoAnn Cline Burrell.

She was a graduate of South Iredell High School and on August 21, 1977, she married the late Charles Douglas “Doug” Blankenship, who passed away on April 21, 2019. She was a member of Society Baptist Church, previously employed by Davis Hospital in Medical Records and was self-employed in Poultry and Cattle Farming.

She is survived by one son, Lynn Blankenship (Maggie) of Clemmons, N.C.; a granddaughter, Stella Blankenship; two sisters, Rhonda Burrell of Statesville and Zina Parlier (Todd) of Statesville; and numerous nieces, nephews and extended family.

The family will receive friends Wednesday, December 4, 2019, from 6 to 8 p.m. at Troutman Funeral Home. A private family burial will be held at a later date.

Memorials may be made to Society Baptist Church, 879 Garden Valley Road, Statesville, NC 28625 and online condolences may be made to the family at www.troutmanfuneralhome.com

Troutman Funeral Home is serving the family of Mrs. Sandra B. Blankenship.