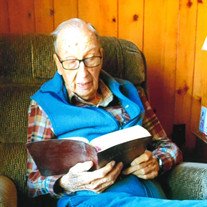 On June 21, 1942, he married Margaret Blackwelder, who precedes him in death. Neil proudly served his country in the U.S. Army during World War II in Europe. He was retired from Fiber Industries and last worked at Twin Oaks Golf Course. He was a member of Triplett United Methodist Church. He was a member of the Men’s Bible Class, a former member of the Methodist Men and served as Assistant Scout Master for 25 years.

For 10 years of his retirement, he spoke to over 12,000 fifth-grade students at The Price of Freedom Museum, where he would tell stories about his World War II service. Neil is also preceded in death by sisters, Ruth Sharpe, Elizabeth Ketchie and Rachel Bustle; brothers, Price, Carl, John Bell and George Morrow; and numerous nieces and nephews.

Services will be held on Monday, December 30, at 2 p.m. in the Chapel of Cavin-Cook Funeral Home with Rev. Joe Collins officiating. Visitation for family and friends will be one hour prior to service from 1 to 2 p.m. also at the funeral home. Burial will follow the service at Triplett United Methodist Church Cemetery.

In lieu of flowers, memorials can be made to the Price of Freedom Museum, 2420 Weaver Road, China Grove, NC 28023 and / or Hospice & Palliative Care of Iredell County, 2347 Simonton Road, Statesville, NC 28625. The family would like to give a heartfelt thank you to all of the neighbors and friends that took care of and would stop by to visit Uncle Neil.

Cavin-Cook Funeral Home and Crematory, Mooresville, is serving the Morrow family. Condolences may be sent to the family at www.cavin-cook.com.