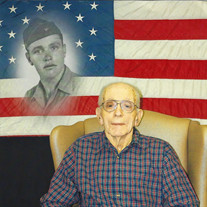 Mr. Willies Eugene Small, 97, of Statesville, N.C., died Friday, November 29, 2019, at Autumn Care of Statesville. Born in Mecklenburg County on July 30, 1922, he was a son of the late John Suell Small and Margaret Tennie Mayhew Small.

On May 5, 1949 he married the former Lillian Reid Small, who died on August 30, 2000. He was a World War II Army Veteran and a recipient of the Purple Heart. He was a retired foreman for Paper Stock Dealers.

In addition to his parents and wife, he was preceded in death by a daughter, Patti Williams, and her husband, Wayne, and a son-in-law, Mike Hoover.

Graveside services will be conducted at 2 p.m. on Wednesday, December 4, 2019, at Iredell Memorial Gardens. Full military rites will be presented by the Iredell County Veterans Council Burial Detail. The family will greet friends Tuesday evening at Nicholson Funeral Home from 6 to 8 p.m.

Fond memories and expressions of sympathy may be shared at www.nicholsonfunerals.com. In lieu of flowers, memorials may be given to the Iredell County Veterans Council, P.O. Box 1633 Statesville, NC 28687.