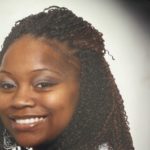 Mrs. Amanda Simone Caldwell Carpenter, 31, of 153 East Barkley Road, Statesville, N.C., was born in Hampton, Va., on May 30, 1988, and was the daughter of Larry Dewayne Caldwell and Adrian James Caldwell. She departed this life on Friday, April 17, 2020, at the Gordon Hospice House following an extended illness.

She was a graduate of North Iredell High School and received a Cosmetology degree. She was employed by Great Clips in Mooresville as a Cosmetologist. She was preceded in death by grandparents, Joseph and Betty Caldwell. She was united in marriage to Billy Gray Carpenter Jr., who survives.

She leaves to cherish the memory of her life, her husband, Billy Gray Carpenter Jr. of the home; her parents, Larry Dewayne Caldwell and Adrian James Caldwell; one son, Devon Tedrian Caldwell Carpenter of the home; one brother, Tedrian Jermaine James of Morrisville; two sisters, Whitney Renee Chambers and Britany Sade Chambers, both of Cary; her grandparents, Billy and Shirley Wilson of Troutman, Nathaniel James and Barbara Smyre James, both of Statesville; a sister-in-law, Cherrelle (Perry) Carpenter of Statesville and Ann Smyre of Charlotte; aunts, Regina (Michael) Avery, Kayshelle (Chad) McClelland, Sylvia (Bradley) Caldwell, Audrey Caldwell and Angela Caldwell; and a host of nieces, nephews, cousins, other relatives and friends.

Celebration of Life Services will be conducted Friday, April 24, 2020, at 2 p.m. at The Rutledge and Bigham Funeral Home. Pastor Charles Davidson will officiate and burial will follow in the Belmont Cemetery.

Visit the Book of Memories for Mrs. Carpenter at www.rutledgeandbigham.com. Rutledge and Bigham Funeral Home is serving the family of Mrs. Amanda Simone Caldwell Carpenter.

There will be no public visitation. Due to the COVID-19 outbreak, Rutledge and Bigham Funeral Home, along with other funeral homes across the country, has been issued a mandate to limit the number of family and/or friends at funeral services. You can only enter the funeral with a funeral pass, which will be given to the family.