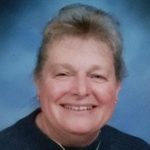 She was born in McCook, Neb., on March 13, 1948, to the late Glenn Hawthorne and Ruth Turner Hawthorne. She was also preceded in death by her husband, Steven J. Baldwin; a son, Ethan Noel O’Neal; and a brother, Richard Hawthorne.

Anita graduated from Booker High School in Booker, Texas, and from Friends University in Wichita, Kan., with a degree in Elementary Education. In 2012 she retired from Union Grove Elementary School. Anita was a member of Union Grove UMC, where she was very involved. Most people will remember her as a devout Christian woman, the church organist for more than 20 years or as the high soprano in the choir. She was also a Sunday School teacher, a member of the Chicks with Sticks Knitting Group, The Methodist Women, Prayer Warriors and Gab-N’-Gobble. Over the years, she also helped with the handbell choir, youth group, art programs and the community/veteran market.

Due to the COVID-19 health crisis, the services will be held at a later date which will be announced. Options for memorials and donations in Anita’s memory will also be announced later. Please continue to check our website for the announcements. With the “shelter in place” in effect, please leave your fond memories and condolences on her Tribute Wall located at www.nicholsonfunerals.com.