About 20 acres at Lake Norman State Park burned on Saturday as a result of a wildfire in the peninsula of the Cove Picnic Area, according to Park Ranger Amy Shepherd.

Superintendent Scott Avis, with the assistances of N.C. Forest Service and Troutman Fire & Rescue, determined the safest strategy was to use an indirect attack to fight the wildfire, Shepherd said in a statement.

Troutman firefighters installed a “fire break” adjacent to the Kingfisher Shelter, using hand tools and backpack blowers to create a four-foot swath of uncleared soil that would not carry fire, she explained. After the fire break — which spanned from one lake shore to another — was in place, Superintendent Avis and NCFS Assistant County Ranger Danny Brasington used drip-torches to set a backing fire towards the wildfire.

The newly set backing fire traveled toward the wildfire, removing available fuels as it goes, leaving nothing to fuel the wildfire, Shepherd explained.

While this strategy allowed more acres to burn, it was safer for firefighters and did not require as much exertion on each individual. 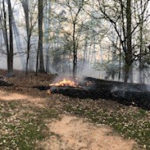 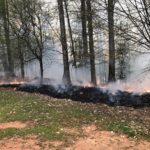 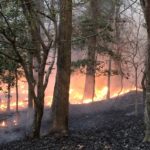 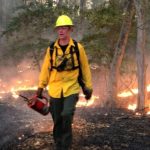 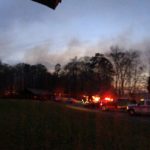