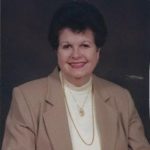 Barbara Arlene Kyles, 87, of Statesville, N.C., died Friday, April 3, 2020, at the home of her daughter. Born in Los Angeles, Calif., on January 11, 1933, she was a daughter of the late Charles E. Byers and Mona Johnson Byers. In addition to her parents, she was also preceded in death by her husband, Charles H. Kyles; her brother-in-law, William B. Kyles; her father-in-law, Howard Kyles; and her mother-in-law, Antha Kyles.

Mrs. Kyles worked in accounts payable at Kewaunee Scientific and was a graduate of Pasadena City College.

A private family graveside service will be held and she will be laid to rest beside her husband at the Troutman Historical Cemetery.