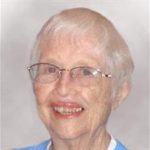 Mrs. Betty Louise Goodin Billings, 83, of Statesville, N.C., passed away on Wednesday, February 5, 2020, at her home. Betty was born in Iredell County on April 16, 1936, to the late William H. Goodin and Bonnie Elder Goodin.

Betty was a graduate of Statesville High School’s Class of 1954. On April 7, 1955, she married Walton “Walt” Lester Billings, and together they shared 64 years of marriage until her passing.

Betty was a member of Western Avenue Baptist Church and she worked for the Iredell Statesville School System until her retirement in July 1997.

In addition to her parents, Betty was preceded in death by three brothers, Charles, Paul and Frank Goodin.

A service to celebrate the life of Betty Billings will be conducted at 1 p.m. on Saturday, February 8, 2020, at Western Avenue Baptist Church with Dr. Jeff Spry officiating. The family will speak with friends following the service.

Memorials may be made to the Western Avenue Baptist Church Building Fund, 1206 Museum Road, Statesville, NC 28625.

Online condolences can be made to the family at www.nicholsonfunerals.com

Nicholson Funeral Home is honored to be serving the family of Betty Billings.