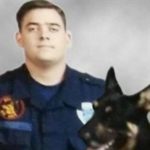 He attended Covenant A.R.P. and Fairview Baptist churches. He was a police officer for the Cleveland, Statesville, and Spencer police departments and was the chief of the Landis Police Department. He enjoyed the martial arts, holding a 6th-degree black belt, and he enjoyed art and creating art. He was a graduate of Western Carolina University.

Survivors, in addition to his parents, include a son, Joshua McCoy; and daughters, MaryKate McCoy and Adriana McCoy Quintana. Also surviving is a sister, Kathryn Lane (Jimmy).

Graveside services will be conducted at 2 p.m. Thursday, April 16, at Beulah Baptist Church Cemetery with Rev. Henry Cook, Rev. Brian Burgess and Michael Sharpe officiating. The family will speak with friends at the cemetery following the service.

The family expresses appreciation to everyone at the Gordon Hospice House for their compassionate care of Brian.

Condolences may be sent online to the family to www.nicholsonfunerals.com. Memorials may be given to Purple Heart Homes, 755 Washington Street, Statesville, NC 28677.