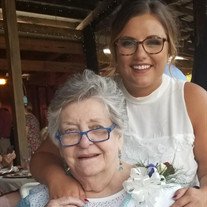 Carol Faye Brown Spears, 81, of Concord, N.C., passed away on Friday, January 17, 2020, at CaroMont Regional Medical Center in Gastonia. Born February 23, 1938, in Mooresville, she was a daughter of the late James Watson Brown and Sara Elizabeth Morrow Brown.

The family would like to express their sincere gratitude to the caregivers of Stanley Total Living Center.

A graveside service will be held at 11 a.m. on Friday, January 24, 2020, at Triplett United Methodist Church, Mooresville. In lieu of flowers, memorials may be made to Stanley Total Living Center, 514 Old Mt. Holly Road, Stanley, NC 28164.

Cavin-Cook Funeral Home, Mooresville, is serving the family of Mrs. Spears. Condolences may be made to the Spears family at www.cavin-cook.com.