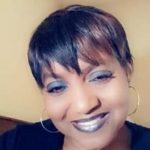 Ms. Deborah Elaine Keaton, affectionately called “Debbie,” was born in Iredell County on May 13, 1961, and was the daughter of the late Mary Keaton Black. She departed this life on Wednesday April 1, 2020, at her home.

She was a 1979 graduate of Statesville High School and attended Mitchell Community College. At one time, she was employed by J. C. Penny as a Jewelry Department supervisor. In addition to her mother, she was preceded in death by her sister, Carolyn Smyre Jones; a brother, Clinton Mills Jr.; and a grandson, Taizel Whren.

Celebration of Life Services will be conducted Wednesday, April 8, 2020, at 2 p.m. at Rutledge and Bigham Funeral Home in Statesville, N.C. Apostle Carl D. Lykes will officiate and burial will follow Belmont Cemetery.

There will be no public visitation. Unfortunately, during the COVID-19 crisis, Rutledge and Bigham Funeral Home, along with other funeral homes across the country, has been issued a mandate to limit the number of family and/or friends at funeral services. You can only enter the funeral with a funeral pass, which will be given to the family.