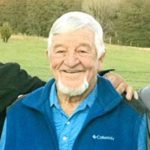 He was born on July 22, 1943, in Baltimore, Md., to the late Ralph and Violet Frady Douthit. Mr. Douthit attended Liberty Baptist Church and Trinity Baptist Church in Mooresville. The first part of his life he worked with General Time and later finished his career proudly with Douthit Electrical.

In addition to his parents, he was preceded in death by the mother of his son, Evelyn Morris Douthit; previous wife, Patricia “Gayle” Moore Douthit; and brother, Bobby Douthit.

He is survived by his son, Charles “Chuck” Douthit, and wife Rhonda and their sons, Chase and Caleb Douthit; stepson, Nicky Helms and fiancée, Angie McConnell; sisters, Jean Karriker and Ann Tilley; and brothers, Arnold Douthit and Jack Douthit.

Cavin-Cook Funeral Home & Crematory, Mooresville, is serving the Douthit family. Condolences may be made to the family at www.cavin-cook.com.