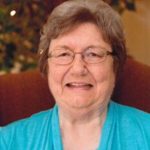 She was born on May 11, 1935, in Iredell County, N.C., to the late Ernest and Lorene Sloop Ownes. Mrs. Hoffner was a retired Registered Nurse. She was a member of St. Luke’s Lutheran Church in Mount Ulla, where she was a former member of the choir.

In addition to her parents, she was preceded in death by her husband, James William Hoffner Sr.

A graveside service will be held at 2 p.m. on Monday, April 27, at St. Luke’s Lutheran Church Cemetery with Rev. Scott Wix officiating. For those who are unable to attend the service, you may go to the following link for the live stream https://www.facebook.com/CavinCookFuneralHomeServices/

A Memorial service will be held at a later date when conditions permit.

Cavin-Cook Funeral Home & Crematory, Mooresville, is serving the Hoffner family. Condolences may be made to the family at www.cavin-cook.com.