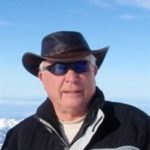 Gary Fredrick “Old Man” Romberg‘s one-of-a kind spirit left his earthly body on January 15, 2020, and joined his family and friends that went before him. Gary was born on February 24, 1935, to Fred and Elsie (Chesterfield) Romberg. Gary was proud of his Swedish heritage, and loved to be called the Old Man. His grandfather had been the Old Man and he inherited the title.

Gary fell in love with his wife Bonny when he was seven and she was three. He knew they were going to be married. It took some convincing on Bonny’s part and they were married on October 5, 1957. In their 62 years of marriage, they enjoyed many adventures together. She was by his side and supported him in his many endeavors. While Gary had an illustrious career and traveled worldwide, what he enjoyed most was time with his kids, grandchildren, great-grandchildren and extended family. The kids enjoyed hearing his stories because they knew “Never let the truth get in the way of a good story.” He handed down those words of wisdom to his children and grandchildren.

Gary worked at NASA in the middle and late 1960s and was involved in putting the first man on the moon. His involvement included aerodynamic development of the Saturn B1 Booster, which propelled the astronauts from the launch pad into outer space.

Gary also had a career with Chrysler for 40 years. Near the end of his career, he was the lead engineer that brought a wind tunnel to Chrysler. Gary couldn’t sit still in retirement and had been working at Aerodyne in Mooresville since 2006. He’s also been an energetic member of American Power Boat Association (APBA) for 45 years.

Gary was an active member of Centre Presbyterian Church, serving in various capacities including the Session. Gary enjoyed fishing but rarely caught anything. But, hearing his fishing stories, all his fish belonged in the Guinness Book of World Records.

Gary is survived by his loving wife, Bonny; his children Val (Karla) of Pennsylvania, Kurt (Kim) of Charlotte, Leif (Kim) of Virginia and Heidi of Virginia. His is the beloved old man to 12 grandchildren and six great grandchildren.

A Celebration of Life will be held on Saturday, January 18, with visitation at 2 p.m. and service at 3 p.m. at Centre Presbyterian Church (129 Centre Church Road, Mooresville). Gary will be interred at Buckley Cemetery in Buckley, Wash., on January 27.

In lieu of flowers, a donation may be made to Centre Presbyterian Church Landscaping Fund.

Condolences may be made to the family at www.cavin-cook.com.