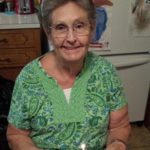 She was born on September 16, 1942, in Albemarle, N.C., to the late Harold and Osia Caudle Crisco. Mrs. Whitesides was “Mom” to everyone and taking care of her children, grandchildren, and great grandchildren was her most important job. She retired as a bus driver and substitute teacher with Iredell-Statesville Schools and especially loved taking kids on field trips. She also sold Avon for many years. She was an active member of Oakdale Baptist Church and was active until recently when her health made her unable to attend. She loved helping with VBS, funeral meals, and nursery. Her favorite thing to do was to go to her beach house at Oak Island with her children, grandchildren, great grandchildren, and friends.

In addition to her parents, she was preceded in death by her husband, Gene Whitesides; brothers Everette and Jimmy Crisco; and son in law Todd Mason.

The family will receive friends on Friday, February 21, from 10 to 11:30 a.m. with a service following at 11:30 a.m. at Oakdale Baptist Church, Statesville, with Pastor Matthew Eades officiating. Burial will follow the service at Oakwood Cemetery.

The family would like to thank Hospice of Iredell County and Gordon Hospice House for their amazing care of our mother, grandmother and great grandmother.

Cavin-Cook Funeral Home & Crematory, Mooresville, is serving Mrs. Whitesides’ family. Condolences may be made to the family at www.cavin-cook.com.