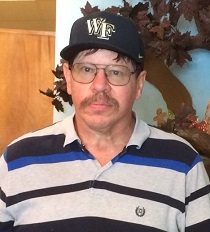 Mr. Gregory Russell Rogers, 59, of Olin, N.C., passed away unexpectedly on Sunday, November 29, 2020, at his home. Gregg was born April 13, 1961, in Iredell County and was the son of Mary Josephine Rash Crisp of Statesville and the late Arthur Marcell Rogers.

He was a graduate of South Iredell High School, Class of 1979 and Mitchell Community College. On April 22, 2017, he married Jannine Marie Kandler Rogers of Olin, N.C. He was a member of Fallstown Baptist Church and previously was the owner of Sonrise Electric.

He was preceded in death by one brother, Gary Rogers.

Funeral services will be held at 6 p.m. on Friday, December 4, 2020, at Fallstown Baptist Church with Rev. David Troutman officiating. Gregg will lie in state on Thursday from 9 a.m. to 5 p.m. at Troutman Funeral Home.

In lieu of flowers, memorials may be made to St. Jude Children’s Research, Shriners Hospital for Children or Hospice and Palliative Care of Iredell County. Online condolences may be made to the family at www.troutmanfuneralhome.com.