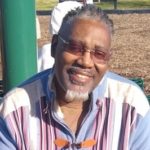 He was a devoted member of Christian Outreach of the Piedmont in Statesville, N.C., and served faithfully for many years as Minister of Music. He had a love for music and will be dearly missed by many who loved him.

In addition to his mother, Mary, Jerry Dean was preceded in death by his sister, Tina Rogers, and his paternal grandparents, George and Myrtle Hill.

A Public Viewing is scheduled for Saturday, April 18, at 8 a.m. at Christian Outreach of the Piedmont, 1424 Rickert Street, Statesville.

Sacred arrangements have been entrusted to Serenity-Murray Mortuary.