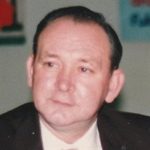 John was born in Iredell County on February 1, 1943, and was the son of the late Grafton M. Fox and Mary Mecimore Fox. He was a graduate of Statesville City Schools and he attended Mitchell College. John was married to the former Elwanda Dixon and together they shared 57 years of marriage until his passing.

John worked with Burlington Industries in research and development, and he holds several patents for designs that he developed during his time with Burlington. He went on to retire from Mauldin Mills in Massachusetts.

In addition to his parents, he was preceded in death by one son, Mark Fox, and one sister, Barbara Loudermilt.

A graveside service will be conducted at 4 p.m. on Saturday, May 23, in the Oakwood Cemetery. Mr. Fox will lie in state on Friday from 12 to 5 p.m. and again on Saturday from 9 a.m. to 3 p.m. at Nicholson Funeral Home.

The service will be lived streamed on Nicholson Funeral Home Facebook page. Online condolences can be made at nicholsonfunerals.com.