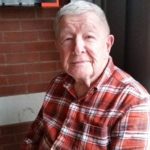 Born August 1, 1930, Mr. Kenneth Charles Green Jr. passed away peacefully on July 14, 2020 at the Gordon Hospice House in Statesville, N.C., with his son and daughter at his side. He was a former resident of Hubbardston, Mass., of many years.

He was a graduate of Gardner High School, where he played baseball and football. He worked as a teller at the First National Bank of Gardner, while attending night classes and graduating from Worcester State College with a degree in civil engineering. During this time, he also served in the Army National Guard, 26th Infantry Division, Company G 181st Regiment out of Gardner, Mass., reaching the rank of Master Sergeant. He spent four weeks in Worcester, Mass., on state military duty aiding the residents after a June 1953 tornado that caused heavy destruction and loss of life in the city.

Ken worked most of his adult life for the F.W. Madigan Co. out of Worcester, Mass. He was the Project Engineer as well as the VP for many public and private construction projects throughout New England. Many public schools in Massachusetts were constructed during his tenure as well as work at WPI and Holy Cross Colleges.

He was a longtime member of the Unitarian Church, serving in many capacities. Additionally, he served the town of Hubbardston on the Board of Assessors, as town moderator, as an inaugural member of the Quabbin Regional High School committee and construction of Quabbin Regional High School opening in 1967. He also took time to be on the committee for the renovation of Hubbardston Center School, knowing the best option was downhill flow. Many facilities, playgrounds, nature space and athletic fields in Hubbardston were built from his blueprints, as he saw the benefits for the town in the future. As a lover of American history, he also found time to serve the Historical Commission as chairman to preserve town history, and he was a member of the 1774 Muster Brigade from Hubbardston as a tribute to Hubbardston’s sacrifice in the Revolutionary War.

Interested in bringing commercial development to Hubbardston, he designed and built the Breezy Hill Corners building. The center of this building housed his Hubbardston Home Center store. He was a people person and thoroughly enjoyed helping solve their hardware needs.

When not busy, Ken enjoyed his gardening, traveling and, most of all, spending time with his family. Some men walk and leave no footprints; Dad left many footprints along the way. He will be missed.

A celebration of Life will be held at a later date at Rural Glen Cemetery Hubbardston, Mass.

Memorial contributions can be made to Marine Mammal Alliance, P.O. Box 332, Nantucket, MA  02554 or https://paypal.me/marinemammalsack?locale.x=en_US

Cavin-Cook Funeral Home & Crematory, Mooresville, is serving the Green family. Condolences may be made to the family at www.cavin-cook.com.