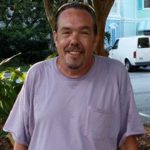 Kenneth is survived by his stepfather who raised him, Edward Hart; his sons, Kenneth Hicks III, Edward Hicks, and Brandon Hicks; his sister, Amy Hart; and extended family.

A Memorial service will be held at a later date when conditions permit.

In lieu of flowers, memorials may be made to Alcoholics Anonymous, 150 S. Church Street, Mooresville, NC 28115.

Cavin-Cook Funeral Home & Crematory, Mooresville, is serving the Hicks family. Condolences may be made to the family at www.cavin-cook.com.