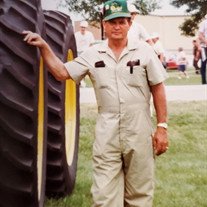 Leonard Wiggins, 85, of Statesville, N.C., passed away on Thursday, August 6, 2020, at Gordon Hospice House in Statesville.

He was born on November 16, 1934, in Iredell County, N.C., to the late Carl Bell “CB” and Corrine Wilson Wiggins. Leonard retired from Parker Trucking Inc. where he was a truck driver for over 25 years. He also enjoyed spending time with family, helping other people, carpentry, racing, and antique tractors.

In addition to his parents, he was preceded in death by brothers, Harrill Wiggins and Kenny Wiggins; grandson, Justin Parker; and brother-in-law, Don Belk.

Graveside services will be held at Iredell Memorial Gardens on Tuesday, August 11, 2020, at 3 p.m. with the Rev. Byron Alexander officiating.

Cavin-Cook Funeral Home & Crematory, Mooresville, is serving the Wiggins family. Condolences may be made to the family at www.cavin-cook.com.