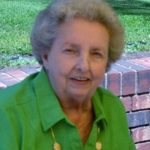 Mary Josey Wiles, 77, of Statesville, N.C., passed away on Saturday, July 25, 2020, at the Gordon Hospice House following a long and courageous battle with cancer.

Born in Statesville on October 4, 1942, she was the daughter of the late Mack C. and Venie Mitchell Josey. Mary was a 1960 graduate of Statesville Senior High School and on October 1, 1960, was married to Dan Graham Wiles Sr., who survives.

She was a member of Front Street Baptist Church and was a retired Office Manager and Bookkeeper. She formerly worked for Curlee Tire and Appliance for 10 years and from 1980 until 1994 at Carolina Tire of Statesville.

A service to celebrate the life of Mary Wiles will be conducted at 3 p.m. on Wednesday at Front Street Baptist Church with Rev. Tim Stutts officiating. Burial in the National Cemetery in Salisbury will follow on a later date. The family will speak with friends one hour prior to the services at the church. If you are unable to attend, your welcome to watch the live service at www.frontstreet.org/sunday-online

Memorials may be made Front Street Baptist Church or the Gordon Hospice House. Online condolences may be made to the family at www.troutmanfuneralhome.com.