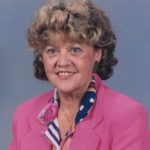 Mildred Ann Davidson Campbell, 84, of Statesville, N.C., passed away unexpectedly on Wednesday, February 12, 2020, at her home.

Mrs. Campbell was born June 9, 1935 in Iredell County and was the daughter of the late Roy Davidson and Berta Roseman Davidson. She was a graduate of Celeste Henkel High School and was a member of First ARP Church in Statesville. She was a loving mother, grandmother, great grandmother, sister, friend and daughter in Christ.

In addition to her parents, she was preceded in death by one son, Darrell Lynn Campbell; five siblings, Alston Davidson, Jim Davidson, Pete “Roy” Davidson, Rosie Davidson and Carolyn Davidson.