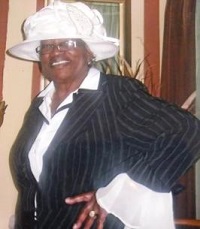 Mrs. Minnie Lee Miller Nelson, 84, of 1346 Fayetteville Street, Durham, N.C., passed away at the Gordon Hospice House in Statesville, N.C. on Thursday, February 27, 2020, following a brief illness. She was born in Iredell County on June 23, 1935, and was the daughter of the late Joay Mattox and Bessie Rucker Mayberry.

She was preceded in death by a son, Willie Lee Miller; two brothers, Leroy Mattox and John David Mayberry; and a sister, Elizabeth Bostic.

Celebration of Life Services will be conducted Sunday, March 1, 2020, at 2 p.m. at The Mary B. Bigham Memorial Chapel of Rutledge and Bigham Funeral Home. Reverend Bobby Laws, pastor of Pilgrim Baptist Church #2 in Durham, N.C. will officiate and burial will follow in the St. Joseph Baptist Church Cemetery. Mrs. Nelson will remain at Rutledge and Bigham Funeral Home, where members of the family will receive friends from 1:30 until 2 p.m., but will assemble at the residence of a daughter, Pamela (Ryan) Turner, 699 Allen Creek Road, Statesville, N.C., at other times.

Visit the Book of Memories for Mrs. Nelson at www.rutledgeandbigham.com.

Rutledge and Bigham Funeral Home is serving the Nelson Family.