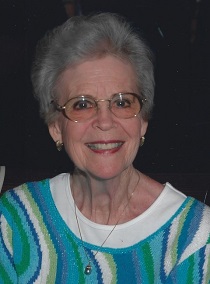 Nettie Bonnie Mae Hazel Engram, 92, of Statesville, N.C.., died peacefully on Saturday, September 5, 2020, at the Gordon Hospice House in Statesville. Born in Griffin, Ga., on June 30, 1928, she was the fourth of five children born to Dee Forrest Hazel and Lizzie Hurley Hazel.

After growing up in the Georgia countryside in a small town called Vaughn, Nettie graduated in the 11th grade from Griffin High School and soon headed to work in the big city of Atlanta! While in Atlanta, Nettie met Jerome Engram during his first year of college, and he soon asked her to marry him. Nettie waited to accept his proposal, encouraging him to finish his degree and they married in Atlanta on May 8, 1953. Fulfilling Jerome’s US Army ROTC commitment, they moved to White Sands Proving Ground, N.M. During this assignment, their son Jerry was born and they opted to make the Army a career. Jerome often reflected that Nettie was not only personally important to him, but he felt her warm and engaging personality strongly contributed to his promotions throughout his career to become a “full-bird” Colonel.

Nettie continued to be a faithful and strong Army wife, moving every few years to a new post, including Germany, upstate New York at Seneca Army Depot, where Jan was born, Maryland, Virginia, Georgia, Iowa, and finally retiring to Statesville, N.C., in the early 1980s. During these posts, Nettie’s role focused on raising the kids, supporting Jerome’s career and as the children got older working in various administrative jobs. Once they settled in Statesville, Nettie and Jerome built a property management business which grew to over 100 rental units throughout the Statesville area. In her spare time, she volunteered on the Board of Directors for the local ARC group to help raise money for this organization focused on helping mentally and intellectually disabled people as well as led the Care team at her church, bringing a smile or encouraging word to those in need or unable to attend church due to illness. Once she was quoted in the local paper, saying “When you help others, you get so much out of it yourself. It makes your own life happier.” This was her personal philosophy about volunteerism – and wonderful advice for anyone.

Nettie will be remembered as a kind, loving wife, mother, aunt, sister and friend, who never knew a stranger. She loved to travel, sing old gospel hymns, grow beautiful flowers, decorate for Christmas, and share her world-renowned chocolate chip cookies. She simply made the world a better place. Her sweet gentle nature and smile will be greatly missed by family and friends.

Nettie was preceded in death by her parents; her sisters Ruth and Mary; her brother Joe; her husband Jerome (“Jerry”); and son Jerry. She is survived by her daughter Jan Skinner and husband Mark of Denver, N.C., her brother Frank in McDonough, Ga., and many nieces and nephews.

A visitation will be held on September 7 at the Bunch-Johnson Funeral Home in Statesville from 3 to 5 p.m. A celebration of her life will be held outside under the oak trees at the New Salem United Methodist Church on September 8 at 10 a.m. Please bring a mask, a chair and wear comfortable, colorful clothing to the celebration (Nettie’s favorite color was purple). Burial will follow across the street at the church cemetery. Memorial donations can be made to the New Salem United Methodist Church at 155 New Salem Road, Statesville, NC. 28625 or Hospice & Palliative Care of Iredell County, 2347 Simonton Road, Statesville, NC. 28625.

Online condolences may be made at www.bunchjohnsonfuneralhome.com.

Bunch-Johnson Funeral Home is honored to be serving the Engram family.